AMD is gearing themselves up for a strong 2019, with plans to bring 7nm products to the CPU and GPU markets en masse, with their Ryzen 3rd Generation processors taking the fight to Intel's high-end offerings.

So what is AMD offering with Ryzen 3rd Gen? For starters AMD is offering more cores, next up there are higher clock speeds, then there's increased power efficiency, and finally, there is increased per clock performance. AMD plans to lead the industry, which means that they don't plan to remain behind Intel. With this in mind, we present to you the Ryzen 3000 series of Zen 2 processors.

There is a lot to unpack here. Zen 2 is a big deal, 7nm is a big deal and together they offer AMD an opportunity to properly take on Intel on the high-end. AMD was not satisfied with 1st generation Ryzen, yes, it shook up the industry, but AMD wanted to do better, push the envelope further and do more for their customers.

With Zen 2 AMD has doubled their cache size and has delivered a 2x improvement to Floating Point performance, two factors which enable increased performance in games and in workstation workloads. In terms of IPC, AMD's Zen 2 cores deliver a 15% boost to performance per clock, with Lisu Su claiming that Zen 2 will deliver a performance boost in all applications.

Now for products, starting with the Ryzen 7 3700X, an eight-core sixteen-thread processor with a 65W TDP, a 3.6GHz base clock speed, a 4.4GHz boost clock speed, 36MB of total cache and performance levels that around 30% faster than Intel's i7-9700K in Cinebench R20.

In gaming, AMD measures a 34% boost in performance over their Ryzen 7 2700X in Counter-Strike, showcasing the tremendous performance advantages of AMD's latest Zen 2 cores. In League of Legends, AMD offers a lower 11% performance boost, but even then this is a tremendous gain for AMD.

So what about those 8+ core rumours? Lisa Su has officially revealed their Ryzen 9 series of processors, confirming that they are offering a two chiplet CPU design which offers twelve total cores and 24 total threads.

This CPU ships with a 105W TDP, 70MB of total cache and base/boost clock speeds of 3.8GHz and 4.6GHz. With this CPU AMD has claimed a performance lead over Intel's i9-9920X while also shipping with a TDP that's 60 watts lower. 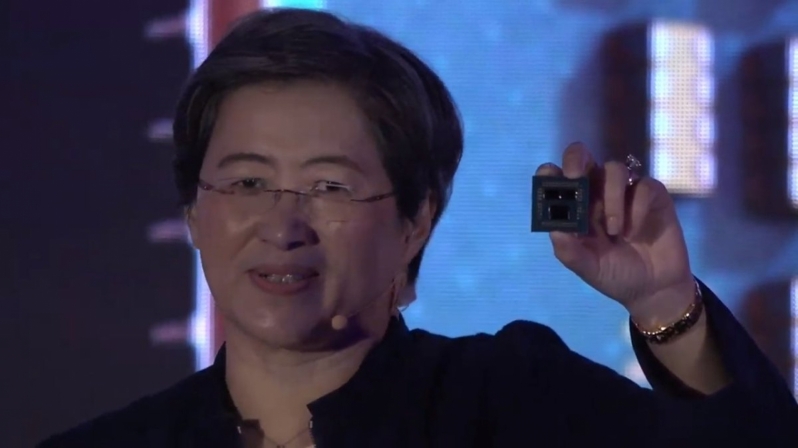 Now it's time for pricing, how much does 3rd Gen Ryzen cost? Here's the lowdown. Wow.

You can join the discussion on AMD's Ryzen 3rd Generation processors on the OC3D Forums.

Dawelio
Gotta say it though, even though they are impressive numbers, they aren’t as impressive as the intital leaks that occured... With the 3700X rumored to have had an 5GHz boost.

Dicehunter
Guessing the early "leaks" of a 16 core AM4 part were false then considering it wasn't mentioned.Quote

Dawelio
Quote:
No idea, considering for example that Joker on Youtube mentioned them in a video. Though he did say to take the numbers with a grain of salt.Quote