- Update - AMD has released a statement confirming that their Ryzen 7000 X3D release date listing was a mistake and that the company has not confirmed a launch date at this time. Below is AMD's statement.

As you know, today AMD.com briefly published a launch date for the Ryzen 7000X3D Series Desktop processors; however, that date is incorrect. We have not confirmed a launch date at this time. We will provide updates on the expected availability of these processors at a future date

AMD has confirmed that their Ryzen 7000 X3D gaming processors will be launching on February 14th, adding the company's 3D V-Cache technology to their Zen 4 CPU architecture to deliver breakthrough gaming performance.

AMD's Ryzen 7000 X3D series of processors include the company's 8-core Ryzen 7 7800X3D, their 12-core Ryzen 9 7900X3D, and their 16-core Ryzen 9 7950X3D. All three of these processors will feature enlarged L3 caches that are designed to enable increased game performance.

AMD's 3D V-Cache technology was introduced with AMD's Ryzen 7 5800X3D, which used 3D die stacking techniques to place a 64MB SRAM die on top of their Ryzen 5000 series CPU silicon to boost a CCD's L3 cache size from 32MB to 96MB. This tripling of L3 cache size allows AMD to accelerate workloads that benefit from having more data on-chip. Having three times as much L3 cache allows AMD's X3D processors to store a lot more data on-chip, speeding up data access by limiting the number of times that CPUs need to search DRAM for important data. To put things another way, it is much faster to get a pen from a drawer beside you than it is to walk to the next room and back to grab it.

AMD's enlarged L3 caches on X3D series processors are particularly beneficial for gaming workloads, as most games rely heavily on memory access to achieve high framerates. Having more data on cache can therefore accelerate these workloads significantly, especially for games like Factorio and Stellaris.

With 3D V-Cache, AMD can effectively deliver a generational leap in gaming performance without making any changes to their Zen core designs. With 3D V-Cache, AMD can accelerate gaming workloads with enlarged caches, though it is worth noting that the performance gains from these enlarged caches will vary significantly on a game-by-game basis, and some games will not benefit from the change at all.

When compared to their last-generation Ryzen 7 5800X3D processor, AMD's new Ryzen 7800X3D CPU is said to offer gamers a 21-30% boost in game performance, offering gamers a significant generational leap in performance. Both of these CPUs feature eight cores and sixteen threads, making these CPUs directly comparable in terms of core-to-core performance. 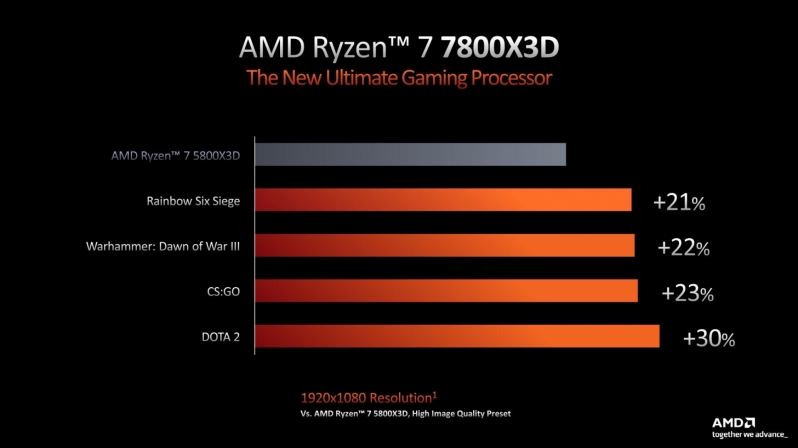 AMD has not revealed the pricing of their Zen 4 X3D processors, at this time. Expect them to have premium pricing over AMD's standard Ryzen 7000 series processors.

You can join the discussion on AMD's Ryzen 7000 X3D CPU release date on the OC3D Forums.

AngryGoldfish
I wonder whether AMD are waiting to see how popular these are before dropping prices on their motherboards. I kind of hope these flop like Zen 4 so that AMD are forced to drop prices.Quote

Digikid
Turns out this is not true at all and was an error. May wanna update that.Quote

AlienALX
Quote:
It's not AMD charging the prices on the boards. With competition this strong you would think someone would make a cut price board to sell well. The fact they have not points back to the real problem with the boards, which is the traces and things needed for PCIE5.

That is why the boards are so expensive.

I really don't understand why AMD were so gung ho about PCIE5. Maybe they thought it would give them some sort of edge over Intel but people are not thick. What I mean is every one knows you don't even need a PCIE4 SSD yet, let alone a PCIE5 one that isn't even available yet.

Now sure, some GPUs now need PCIE4 to perform properly, so fair play to that. Once again though PCIE5 will offer nothing for so long that by the time you need it your board will be an antique. Same goes for PCIE5 SSDs. People have been ranting on about directstorage for years now. Where is it? same goes for Mgpu and so on. None of it was ever used.

If Xbox was the leading console platform (it isn't) then maybe we would see more of those things. Thing is it's not, not by a long way, so why would you bother spending even $1 more on development for something hardly any one will use?

The problem with these boards is that they use PCIE5. Not anything else. This leads to high cost to manufacture and that is all passed onto the buyer. For something they don't even need, let alone want.Quote

AngryGoldfish
Quote:
Are you saying PCIe Gen 5 causes a motherboard that once was 150 to now be 280?Quote

If Intel end up going the same way then so will the prices.Quote
Reply