AM4 is ready for Ryzen 3rd Gen

When AMD revealed their AM4 platform, the company pledged to support it through 2020, granting users unprecedented levels of forwards compatibility. Users of 1st Generation Ryzen motherboards with B350 and X370 motherboards will be able to upgrade to Ryzen 3rd Generation processors, assuming that their mainboard's manufacturer supports it with a Mattise compatible BIOS update.

Moving forward, Ryzen X570, X470 and B450 motherboards will be released with out of the box Ryzen Desktop 3000 series support, with AMD's older X370 and B350 motherboards requiring a "selective beta BIOS update" to run AMD's next-generation processors.

Sadly, AMD isn't supporting their Ryzen 3000 series of processors on A320, at least according to the infographic below, though it is worth noting that A320 motherboards make up a minority of AM4 users, with mode sales being for pre-built OEM systems.

Users of existing AM4 motherboards should check with their board's manufacturer to ensure that their system will support AMD's Ryzen 3rd Generation processors. Matisse Ready BIOS updates have already started rolling out with some manufacturers. 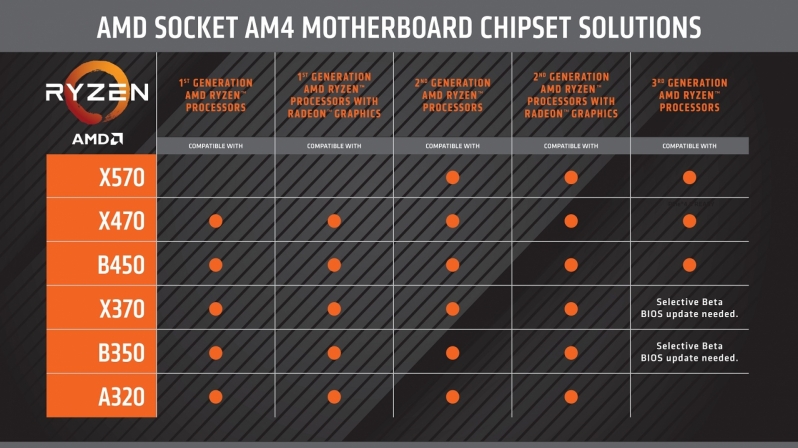 You can join the discussion on AMD's AM4 platform being ready for Ryzen 3rd Generation processors on the OC3D Forums.