The stock price has fallen, but AMD will still have a strong 2020

AMD has released its full-year 2019 financials, revealing strong revenue growth in Q4 and further growth in 2020. In response to this, AMD's stocks have decreased in value, as AMD has failed to meet some of the predictions set by analysts in its 2020 guidance.

OC3D isn't about stocks and shares; we talk about hardware here. While Wall Street isn't impressed with AMD, hardware enthusiasts should be, as AMD plans to deliver revenue growth of 28-30% in 2020. How is AMD going to achieve this growth? That's right, increased hardware sales. How will those sales be achieved? With strong product offerings.

While AMD has failed to meet the expectations of analysts, 28-30% growth is no small feat, and this should be considered when looking at shareholder-focused articles and analysis.

When compared to Q3 2019, AMD's operating income has increased by 87%, giving AMD more money to share with its investors and more money to focus on R&D. 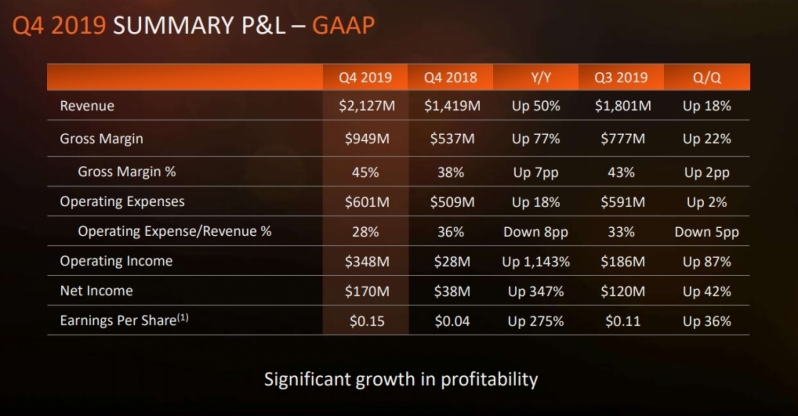 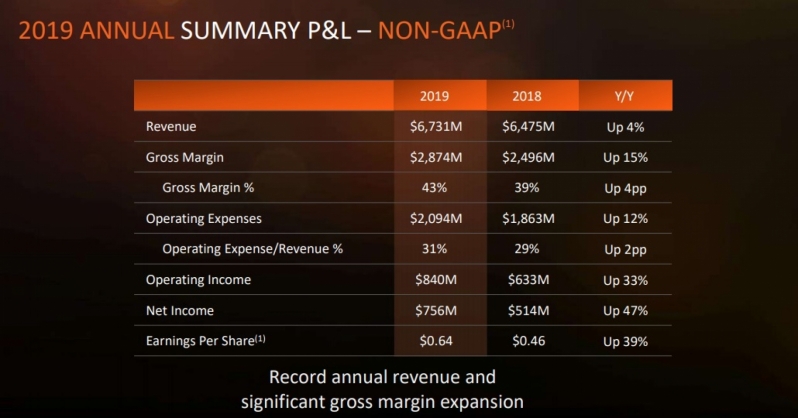 In 2020, AMD will see significant growth, following up a strong 2019 with a stronger 2020. Don't lett AMD's stock price fool you, AMD is growing, and will continue to grow. The only problem is that analysts expected more.

With a 28-30% increase in revenue and a two percentage point increase in gross margins, AMD's 2020 profits are expected to be much higher than any time in the past decade. This growth will help AMD invest in more products and boost its R&D spending, factors that can only be good for the CPU market moving forward.

Some are disappointed in AMD's financials, but it is undeniable that 2020 will be a strong year for AMD. Let's hope that AMD's 2020 product offerings will be stronger than ever, especially within the GPU market.

You can join the discussion on AMD's 2019 financials and 2020 predictions on the OC3D Forums.

g0ggles1994
Given the market giant they're up against, AMD are absolutely smashing it out of the park coming from near bankruptcy to this. To those detractors who aren't impressed: AMD are still building momentum, there's a lot more comingQuote

Warchild
Look at that net income though. up 347%. That is impressive. You can't deny it given their history.Quote

WYP
It's also worth considering how much debt AMD has paid off. By this time next year, AMD could be debt free, which will free up a lot of funding for investment.Quote
Reply