AMD has released their latest investor roadmap for 2019, reconfirming the product launches which will define the year. Strangely, AMD's May 2019 roadmap contains less information than AMD's older March 2019 roadmap, removing 3rd Generation Threadripper from their product roadmap, leading to rumours and speculation to fill the minds of PC enthusiasts and analysts alike.

Below is an image of AMD's March 2019 Investors Presentation, which placed the release of AMD's 3rd Generation processors in a 2019 timeframe. Please note that this roadmap was listed as "subject to change". 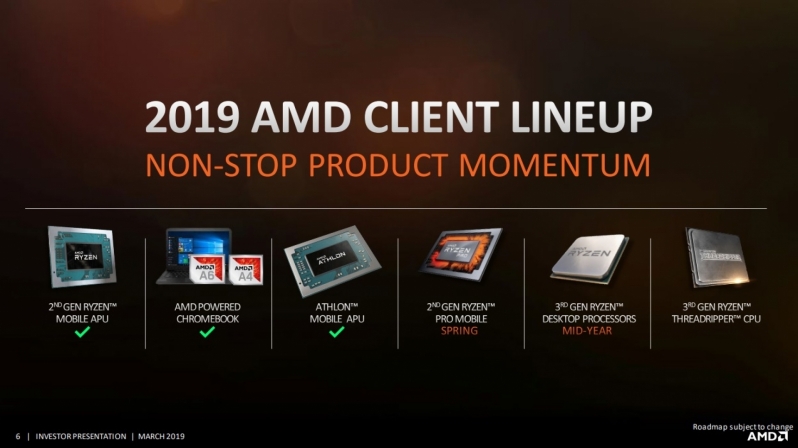 What is worth noting here is that AMD can include or exclude products from their roadmap as they see fit. For example, AMD's Navi series of graphics products are not present within both their March and May 2019 roadmaps, despite the fact that AMD has committed themselves to a Q3 2019 release timeframe. 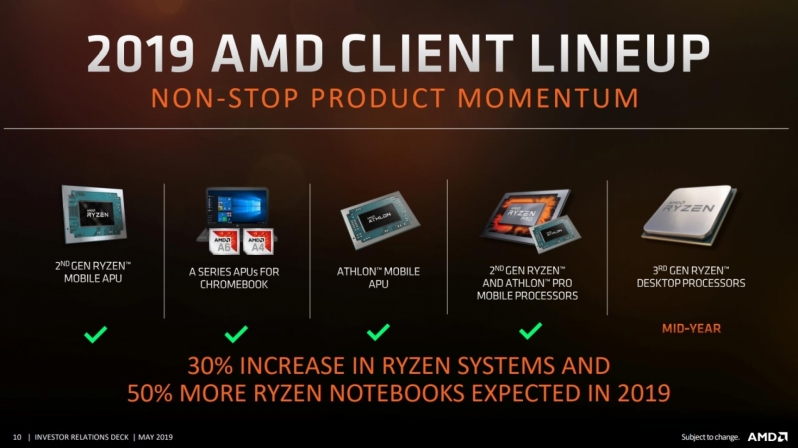 Are AMD's 3rd Generation EPYC processors delayed? Who knows, but what we will say is that an edited roadmap isn't by any means a confirmation of a delayed product launch. Simply put, AMD's new slide is designed to focus on AMD expected growth of Ryzen system sales in 2019, giving AMD little reason to include Threadripper within their slide.

With regards to system sales, AMD's late 2019 launch of 3rd Generation Threadripper would have a minimal impact on system sales, giving them little reason to include it in their investor presentation. Context is key. Note that AMD's new investors slide focuses on client systems, where their older roadmap only focused on product launches.

AMD could release Threadripper 3rd Gen with the same core count as 2nd Gen, utilising AMD's Zen 2 architecture and higher clock speeds to offer the bulk of its performance improvements, though it is also possible for AMD to deliver an intermediate core count boost. A 48 core model seems likely, with AMD saving a full 64 core offering for a later date. Does AMD really need 64 cores to beat Intel's HEDT offerings in 2019?

With Threadripper using the same CPU socket as EPYC, AMD can easily offer the same core counts as EPYC 2nd Generation. The question now is, will they?

You can join the discussion on AMD's Ryzen Threadripper 3rd Generation processors on the OC3D Forums.