When AMD announced their Ryzen Threadripper series of CPUs, many wondered why the company decided to release an 8-core variant for their HEDT platforms. Often we have read comments wondering why users don't simply purchase a Ryzen 7 1800X, though simply put these users are missing the point of AMD's Threadripper 1900X.
What that 1900X offers is an affordable entry point into AMD's X399 platform, offering the same I/O capabilities as their other Threadripper series CPUs. This is in huge contrast to Intel, whose lower end X299 CPUs offer fewer PCIe lanes than their higher-end counterparts.
If AMD's AM4 platform does not offer the I/O capabilities that you desire, then X399 may be the platform for your, with the Threadripper 1900X releasing as a great entry level CPU for the platform. This CPU will be priced at $549 in the US (£545 in the UK). 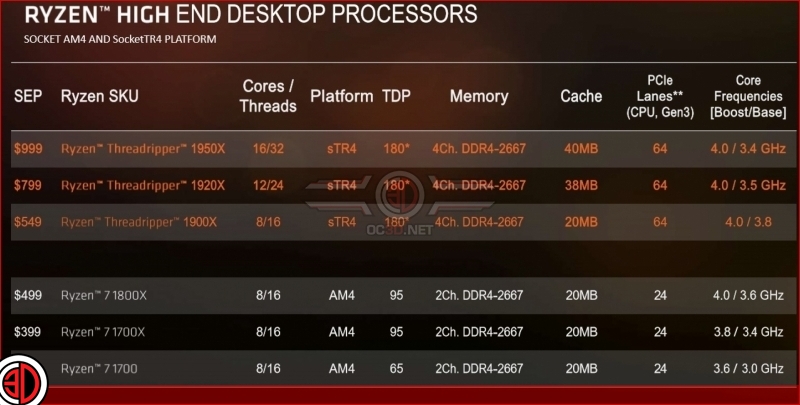 In terms of pure CPU clock speed, AMD's Threadripper 1900X offers a boost over AMD's AM4 R7 1800X, offering base clock speeds of 3.8GHz and a maximum XFR boost of 4.2GHz, giving the 1900X more single-threaded CPU performance in addition to its support for 4-channel memory and additional PCIe lanes.

When compared to similarly priced Intel CPUs, the 1900X offers insane levels of PCIe connectivity, making it the perfect CPU for those that desire a system with multiple PCIe devices and NVMe SSD RAID (NVMe RAID will be enabled with BIOS and driver updates on September 25th).

This CPU will be built using a (4+0)+(4+0) CPU core configuration, which means that on the two active Ryzen CPU dies on this CPU, only four are active on each CPU, all of which are from the same CCX unit. This will minimise inter-core latency within the same CPU die. 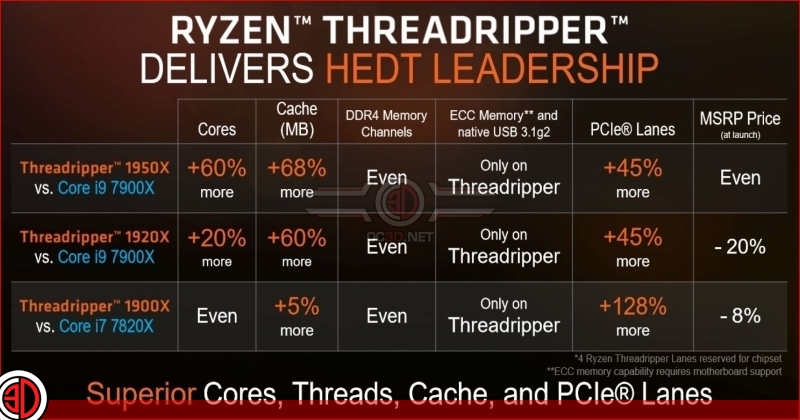 The Ryzen Threadripper 1900X is a CPU for those that care more about PCIe connectivity than pure CPU performance, offering the same number of PCIe 3.0 lanes as AMD's more expensive 1920X and 1960X CPUs while still offering a reasonable core/thread count.

Below are a few examples of what can be done using Threadripper's 64 PCIe lanes. Also note that Threadripper does support ECC DDR4 memory, though users will need to ensure that they purchase an ECC compatible motherboard to make use of this error-correcting memory type. 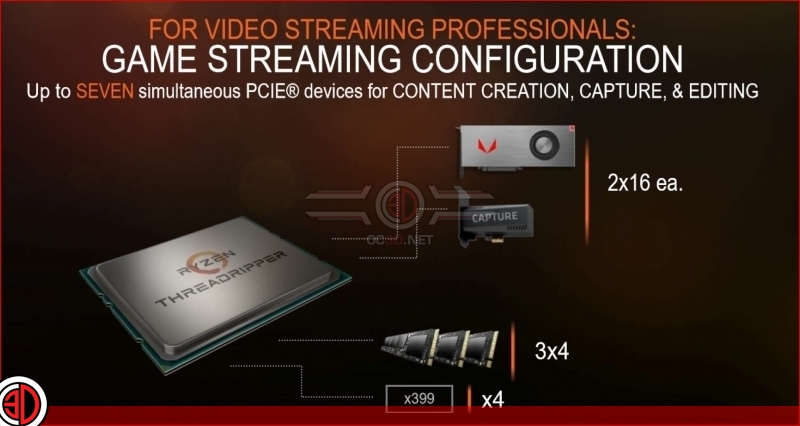 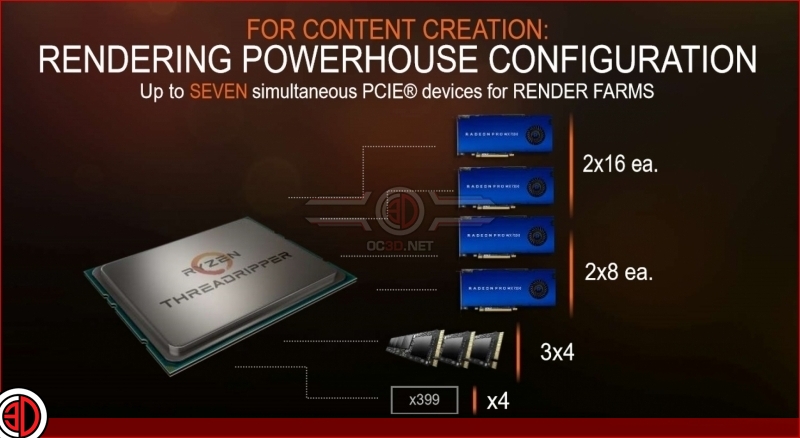 You can join the discussion on AMD's Ryzen Threadripper 1900X CPU on the OC3D Forums.

AlienALX
Great option for pros, or any one needing lots of lanes

AngryGoldfish
And of course it leaves users room to grow down the line with (potentially) up to 32 cores in the future. 4.2Ghz XFR is very good.Quote

NeverBackDown
Yeah this was a good move to release this cheap TR. Not everybody needs all the cores but may need high volumes of IO.Quote

Korreborg
Hmm if the 1900x can hit 4,2 GHz or more, on all cores with an OC. It could be an awesome CPU, even for a gamer

wedgie2007
The i7 7700k and 7820x still beats the threadripper for gaming. Just look at any benchmark test.Quote
Reply