AMD has made their first operating profit for over three years

Advanced Micro Devices (AMD) has released their Q3 financial report, showcasing the first operating profit for the company in over three years. This profit is mostly thanks to increased revenue, especially from the company's Computing and Graphics Division, which generated 74% more revenue than this time last year.

In total the company generated revenue of around $1.64 billion, which is an increase of 26% year-over-year while delivering a GAAP Operating income of $126 million, rather than an operating loss of $293 million.

Strong customer adoption of our new high-performance products drove significant revenue growth and improved financial results from a year ago, Our third quarter new product introductions and financial execution mark another important milestone as we establish AMD as a premier growth company in the technology industry.

Breaking things down further, AMD's Computing and Graphics Division posted revenue of $819 million this quarter, offering a 75% increase year-over-year due to strong sales of both Ryzen and Radeon CPUs and GPUs. Ryzen CPU sales have also significantly increased the cost per unit of AMD CPU sales, thanks to the CPU's high levels of performance when compared to AMD's older products.

AMD's Computing and Graphics Division earned AMD an operating income of 70 million, which is great news for the company since this decision was operating at a $66 million loss this time last year.

AMD's Enterprise, Embedded and Semi-Custom segment earned a revenue of $824 million this quarter, earning roughly the same amount that the segment earned last year. This quarter AMD has earned less money from Semi-Custom SoC sales, which are used to make consoles like the Xbox One and PS4/PS4 Pro, though this reduction in sales has been offset by the revenue created by their new IP revenue and the sale of EPYC CPUs.

This division earned AMD an operating profit of $84 million, though this is down from $136 million this time last year.

The company has also been able to reduce its "all other" operating losses from $363 million to $28 million, though this change is mostly due to AMD's WSA surcharge from Globalfoundries last year. 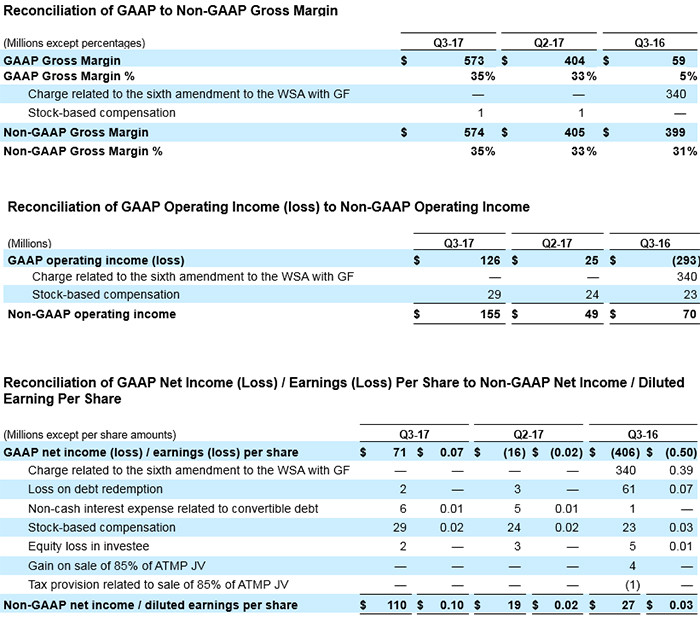 In all this has been a strong quarter for AMD, with the company delivering a profit in both of its major divisions thanks to strong sales for their Ryzen CPUs, Radeon GPUs and EPYC enterprise products.

Moving into Q4 AMD expects to see its revenue drop around 15% (+ or - 3%) and see a revenue boost of around 26% increase in Q4 revenue year-over-year.

You can join the discussion on AMD's Q3 2017 financial report on the OC3D Forums.

Excalabur50
Nice to see AMD return to profitability as we can't have enough competition in the market place, this is good for all.Quote

AlienALX
This is brilliant.

What is also nice was a survey I read recently. For the life of me I can not remember where it was but it was on one of the big websites. Even with the launch of Coffeelake Ryzen had 60% of all of the votes. CL had something silly like 8%.

Pretty crazy how much opinion has changed. I think a lot of people are pretty angry at Intel.Quote

g0ggles1994
Quote:
It's great to see opinion changing like that, but there's still too many people just going out and buying Intel because it's Intel and trash talking AMD as the "cheap" or "poor mans" choice. The tides are shifting, but I don't think they'll shift to a 50/50 or 60/40 share in the CPU market anytime soon. AMD need to get Ryzen refined and clocking higher soonQuote

AlienALX
Quote:
The numbers are getting fewer though. Mostly now, even on f4n801 heaven sites like Linus people will advise Ryzen (usually the 1600). Which did surprise me. Youtube comments also seem to be the same, with an overwhelming majority all seriously peeved at Intel and recommending Ryzen.Quote

NeverBackDown
Good for AMD. Bad for me..
I should have bought stock a couple years ago... Would have been smart