BIOS updates are required to enable this feature

NVMe RAID on Threadripper is only supported on Windows 10 build 1703 or newer. AMD 's NVMe RAID driver is available to download here.

Below is AMD's basic step-by-step guide to set up a NVMe RAID configuration on Threadripper.

With these new updates, AMD users can now RAID up to six different NVMe SSDs, with AMD's testing showing a 5.38x gain in IOMeter throughput when using six NVMe SSDs. This setup allows six Samsung 960 Pro SSDs to offer over 21200MB/s reads, which is almost 40x faster than a high-performance SATA SSD. 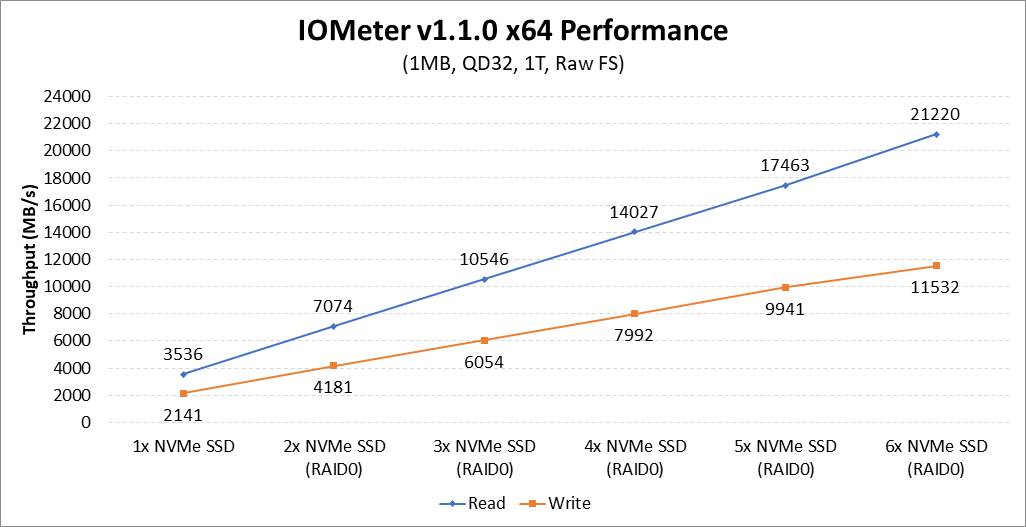 The lack of NVMe RAID support at launch was very disappointing for AMD's Threadripper platform, especially given the sheer number of PCIe lanes that are available to utilise. This allows AMD users to create huge NVMe RAID arrays, which may seem like a useless prospect to many consumers given the pricing of high-speed NVMe SSDs, but it is certainly of interest to those that can find a use for ultra-high speed non-volatile storage.

You can join the discussion on AMD bringing NVMe RAID support to their X399 Threadripper CPU platform on the OC3D Forums.

cj09bruno
Considering intel released their version only a few months ago, and that version requires people to pay to access it and it only supports intel drives, i would say amd is the first to market with a solution that is actually usable, so "very disappointing" would not be the words i would useQuote

NeverBackDown
Quote:
While I agree saying "very disappointing" is the wrong phrase I'd use, my issue with this is that NVMe raid is so useless that does it matter it's barely 3 months(if that?) Delay? I do not think so.

The only thing we're it would benefit a person is when reading massive 4k/8k raw files in Premier and scrubbing timelines.Quote

Kleptobot
Quote:
Yes, because the only use of RAID is to get a speed boost.Quote

NeverBackDown
Quote:
Yes because people will buy 2 very high TB NVMe drives and raid them in raid 1 because it's a cheap and sensible option. And to the ones that do? They can wait like they did. The whole 3 of them. Why delay a launch of over raid.Quote

S_I_N
Quote:
I'm not exactly sure what your referring to so excuse me if I'm wrong. But I have been using NVMe raid on intel since around Z270 launch which was Jan 5. I did not have to pay intel for it I am using intel drives though as that is all that was available to me at the time. All I had to do was set up the array and load the raid drives prior to opsys install.

Quote:
I do raid 0 to get 2 drives spanned together making for a larger platform. I did NVMe raid 0 for epeen and to get a larger than 256 opsys drive. I agree speeds are not an issue once you go NVMe or even ssd for that matter lol. If a larger NVMe drive was available to me at the time I would of raided for a time to see raw performance then dropped it back to a single NVMe drive.Quote
Reply