AMD reconfirms that Zen 3 Ryzen processors are releasing in 2020

AMD reconfirms that Zen 3 Ryzen processors are releasing in 2020

A lot of recent rumours have suggested that AMD had delayed its upcoming Zen 3 processors, moving their launch from 2020 to early 2021. This delay was allegedly the reason behind AMD's recent launch of AMD Ryzen 3000XT series processors, an injection of new life into the Ryzen 3000 series to tide it over until the release of the Ryzen 4th generation processors.

AMD has heard these rumours and has reconfirmed that they plan to release Zen 3 based Ryzen processors this year, backing up the comments of their CEO and the roadmap they outlined during their latest investor presentation (see the slide below).

Zen 3 is due to deliver AMD fans further enhancements to the single-threaded and multi-threaded performance of the company's Ryzen series processors, either by boosting clock speeds or the performance levels the architecture delivers per clock cycle. Major cache changes are also expected, which could significantly increase the gaming performance of AMD's next-generation chips, a factor which will be hugely beneficial for AMD within the consumer PC market. 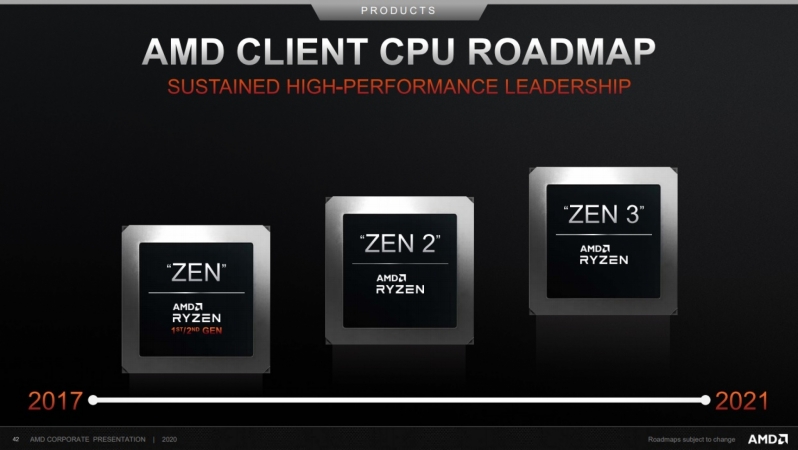 So is Zen 3 delayed? No, it isn't. AMD has made it clear that they plan to release Zen 3-based Ryzen processors in 2020, setting aside any rumours to the contrary.

You can join the discussion on AMD's confirmation that Zen 3 processors will release in 2020 on the OC3D Forums.

NeverBackDown
I still find it weird to release a refresh a handful of months before the next gen CPU.

Could only see it to give it more attention and to help clear shelves. They may not have made many of these XT versions. Just my guessQuote

WYP
Quote:
AMD did release that pointless Ryzen 7 2700X 50th anniversary edition and Intel had their i9-9900KS and their i7-8086K. New SKUs like this aren't exactly uncommon.

AMD's current weakness is still single-threaded performance, and these new SKUs do address this somewhat. I'm looking forward to seeing testing for this.Quote

ET3D
The problem I have with this news is that I couldn't find any link to an official AMD statement or even a description of where AMD has confirmed this. There are enough doubters who will not be convinced by something like this.Quote

NeverBackDown
Quote:
Seems to be a conference call with media outlets. Looking at AMDs own site the information hasn't been posted yet.Quote

WYP
AMD isn't going to issue a press release to deny a rumour like this. AMD just told those from the press who asked that the rumour was nonsense.

Even a few weeks ago AMD higher-ups have said that Zen 3 is on track for release this year, and those higher-ups will know things a lot further in advance than rumour sources.

AMD are being tight-lipped about Zen 3 to encourage more Zen 2 processor sales. They are already in a strong position, so they don't want anyone to adopt a "wait for Zen 3" mentality.

If AMD had delayed Zen 3, it would be a big failure. AMD needs solid roadmap execution to gain market share within the server and notebook markets. They need to be reliable where Intel isn't.

So no, there isn't something to link to on AMD's website to deny this rumour. We just have all of the statements from AMD from earlier this year that they are committed to releasing Zen 3 in 2020. AMD wants us to take them at their word.Quote
Reply