AMD reaffirms commitment to AM4 socket until 2020

AMD's support for AM4 is a huge strength for the company

AMD reaffirms commitment to AM4 socket until 2020

When AMD released their first Ryzen series processors in 2017, the company committed themselves to the continued development of their new AM4 platform, promising support until 2020.

With the release of their Ryzen 2nd Generation processors, all of which are compatible with AMD's 1st Generation 300-series motherboards (when using up-to-date BIOS files), the company has reaffirmed their commitment to AM4, which already supports four families of processors. So far AM4 supports Bristol Ridge (Excavator APU), Summit Ridge (Ryzen 1st Gen), Raven Ridge (Ryzen + Vega APU) and Pinnacle Ridge (Ryzen 2nd Gen).

This commitment should allow existing motherboards to support AMD's Ryzen 3000 series processors, which should use AMD's Zen 2 architecture, which will be built on 7nm and offer more significant improvements to the company's CPU design.

After 2020 we move into the territory of PCIe 4.0 and DDR5 memory, making further support for AM4 untenable. Even so, AMD is set to be supported for longer than any Intel socket in recent memory, which tend to be compatible with only two families of processors. 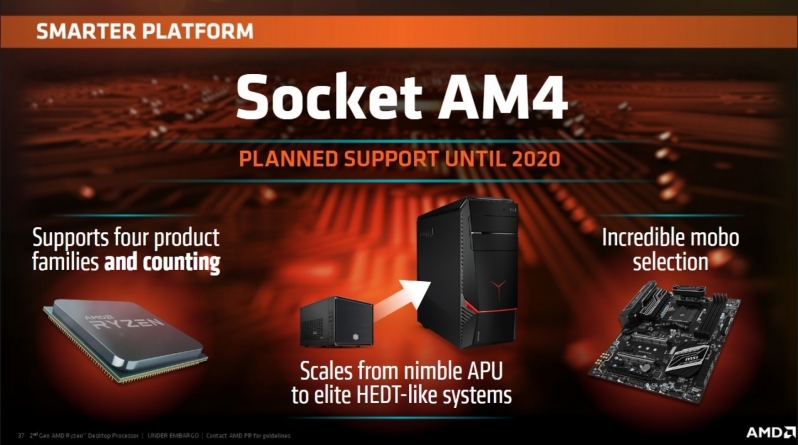 Moving from Kaby Lake to Coffee Lake Intel required users to upgrade their motherboards without a socket change from LGA 1151, highlighting the advantage that AMD offers through their continued support for AM4.

AMD's language suggests that existing AM4 motherboards will support at least one more family of Ryzen series CPUs, which is great news for users who upgrade regularly.

You can join the discussion on AMD's commitment to their AM4 socket on the OC3D Forums.
«Prev 1 Next»

Dicehunter
That's pretty cool, If there really is no performance differences between the boards going forward after Ryzen 2, I'll end up sticking with my C6H until DDR5 comes out and just drop in each yearly release.Quote

MacLeod
Quote:
Yeah me too. My Strix is the 2nd beefiest board available for AM4 second only to your Crosshair. I bought it just for that reason, so I could upgrade to Ryzen 2 with simply a BIOS update.

So far these Ryzen chips don't seem to be needing a whole lot of over the top voltage so over built boards like the Strix should last for a good long while.Quote

TheF34RChannel
Newer features may see one upgrading the board though. But cool AMDQuote
Reply