AMD's Zen 2 EPYC processors are now available, creating the most significant shake-up the server market has seen since the introduction of Opteron. The impact of EPYC cannot be understated, with AMD promising performance, efficiency and pricing advantages over Intel, opening the door to some serious market share gains.

AMD is on fire, but the road doesn't stop at ROME. AMD has confirmed that their Zen 3 designs are complete and that Zen 4 is already in design. At their EPYC "ROME" launch event, Lisa Su stated that they are working with server makers to implement design changed, which will directly benefit their desired workloads. With Zen 2 EPYC, AMD has already shown us that they are capable of some significant performance leaps with each new iteration of Zen.

In recent interviews, AMD's Forrest Norrod has stated that "Milan", AMD's 3rd Generation EPYC processors are due to release in mid-2020. Furthermore, these processors will be compatible with AMD's existing SP3 socket. With this, AMD has promised that existing 1st generation EPYC and second-generation EPYC deployments will be able to upgrade to Zen 3 processors with relative ease.

With EPYC, AMD is clear with its future roadmap. New EPYC server deployments will be upgradable to support AMD's next-generation of EPYC "Milan" products. This is something that cannot be said for Intel's current server lineup. It is also probable that Zen 3 "Milan" EPYC processors will be releasing in a similar timeframe to Intel's 10nm Ice Lake server processors. 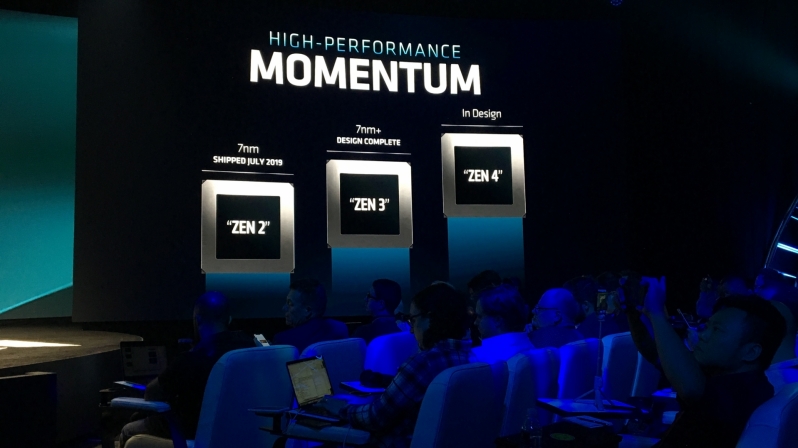 With ROME, AMD has built an astounding amount of momentum, and that progress is not due to end with ROME. AMD has confirmed that Zen 3 will utilise a 7nm+ manufacturing process, which means that we should expect a smaller power efficiency jump with Zen 3. That said, AMD has been able to consistently improve the performance of their processors with each generation of Zen, with Zen + and Zen 2 proving to be significant leaps over their predecessors in the consumer space. With this in mind, we expect Zen 3 to offer some notable design changes.

AMD released their Zen 2 "ROME" processors on time, and they expect the same to happen with Zen 3/Milan.

You can join the discussion on AMD's future server plans on the OC3D Forums.

NeverBackDown
Wonder if that means we could have Zen 3 architecture be compatible with AM4 socket.Quote

WYP
Quote:
Should be. I don't see DDR5 taking off before this time next year. New memory types usually start at the high end and trickle down. I think DDR4 started with X99.Quote

tgrech
Yeah AMD did say 2020 explicitly for new product support assuming the consumer launches are also set for mid-2020 like this. TSMC's 7nm+ has a stated improvement of 10% performance or 15% power efficiency improvements so will probably translate to a couple MHz extra on the top end and low idle state consumption, but the key benefits would probably be from the maturity of the node and the use of EUV in non critical areas improving yields and making a wider uarch/+more cache viable economically.Quote

NeverBackDown
TSMC improvements are recorded for very simple circuits. Which is what Lisa Su stated. You don't get the same benefits on larger complex architectures.Quote

tgrech
Yeah that's why I said a couple hundred Mhz rather than the >400MHz a straight 10% gain would deliver. The first TSMC 7nm+ device will be the Huawei(HiSilicon) Kirin 985 SoC launching quite soon and they're expecting about 20% gains over the 980 (Apple A13 expected around the same time but they usually come with big arch & layout changes too so hard to compare).Quote
Reply