Following Intel's cataclysmic Q2 2020 earnings, all eyes are on AMD to see if the manufacturer has what it takes to capitalise on the weakness of its rival. Now, AMD has released its Q2 2020 financials, and they will no don't please the company's shareholders.

In Q2 2020, AMD generated revenues of $1.93 billion, representing a 26% increase year-over-year and an 8% increase quarter-over-quarter. These gains were made despite the coronavirus pandemic, and have been driven by increasing Ryzen, EPYC and semi-custom sales.

Before the end of 2020, AMD plans to launch Zen 3 Ryzen/EPYC processors, RDNA 2 GPUs, and CDNA datacenter GPUs. All of these products are "on track", which points toward solid sales for AMD in Q4 and a strong start to 2021.

AMD has now stated that its full-year 2020 earnings are now projected to be 32% higher than what AMD achieved in 2019. During AMD's Q1 2020 earnings call, AMD expected revenue growth of 25% during 2020, highlighting AMD's confidence as they enter the second half of the year.

AMD's revenue gains come primarily due to AMD's growth in Ryzen and EPYC processor sales. Computing and Graphics say revenue growth of 45% year-over-year and down 5% quarter-over-quarter.

Enterprise, Embedded and Semi-Custom (EES) is down 4% year-over-year and down and up 63% quarter-over-quarter. This decrease in EES sales is primarily due to lower semi-custom sales (thanks to lower console sales YoY), though this is somewhat offset by increased EPYC processor sales. AMD is also starting to see increased Semi-Custom revenue through semi-custom sales, thanks to the upcoming release of next-generation games consoles. 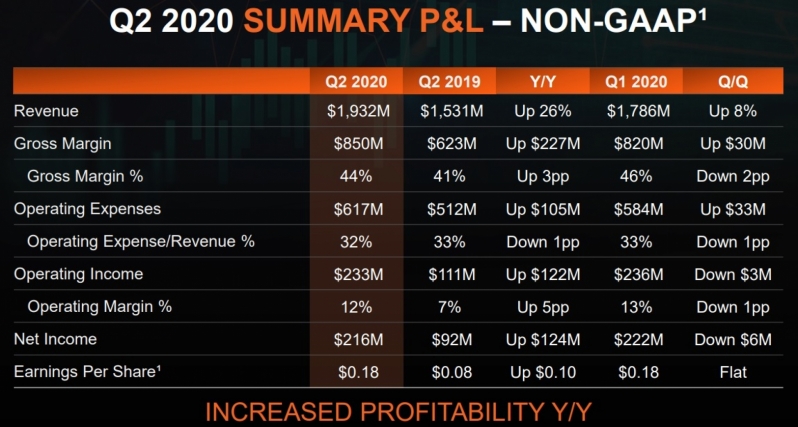 In late 2020, AMD expects to release its first Zen 3 CPUs and RDNA 2 powered graphics cards, both of which are due to deliver strong generational improvements to the company's product stacks.

You can join the discussion on AMD's Q2 2020 financials on the OC3D Forums.

Warchild
Id love to see a 5yr, year on year going back to 2015. Just makes me smile to see their struggles blossom into incredible profitability.Quote
Reply