Intel's yearly revenue has increased by over $1 Billion

2017 has been a remarkable year for AMD, propelling itself back into profitability in the second half of the year while also showcasing revenue growth of over $1 billion, increasing their yearly revenue from $4.27 billion in 2016 to $5.33 billion in 2017.

While overall revenue went down in Q4, AMD managed to retain high levels of profitability, showcasing a huge reversal when compared to their 2016 financials. AMD hopes to ride this upward trend further with predicted revenue of $1.55 billion (+/- $50 Million) in Q1 2018, an increase of over 32% when compared to Q1 2017.

Moving into 2018 AMD expects to see revenue growth, especially as Ryzen products with integrated Vega graphics come to market, making Ryzen a lot more attractive in the OEM PC market. Strong sales for both EPYC and Ryzen are expected in 2018, especially with the release of AMD's Ryzen 2nd Generation CPUs and 2000G series of CPUs with Vega Graphics over the next few months. 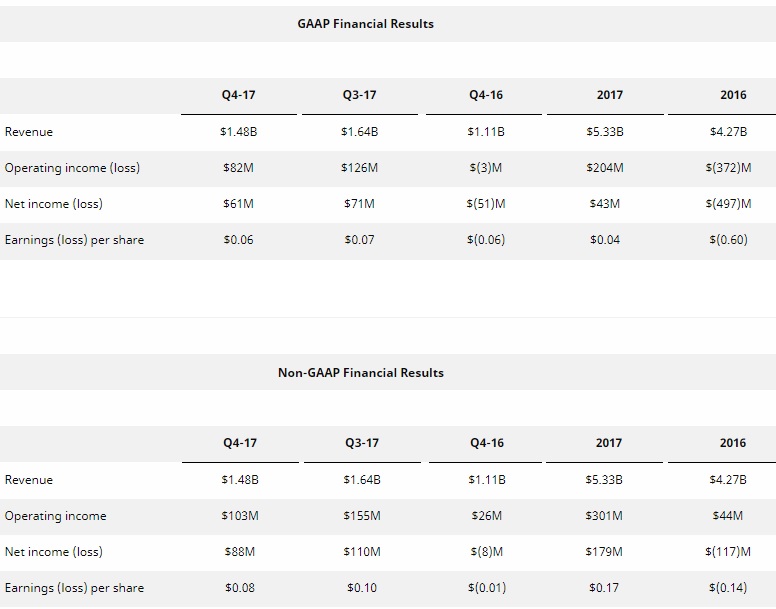 2018 will undoubtedly be another fascinating year for AMD, especially after the significant changes to the Radeon Technologies Group and their merger with AMD's Semi-Custom division. Things will also remain interesting on the CPU side with Ryzen and Threadripper 2nd Generation CPUs, with the company's Zen 2 architecture being expected in early 2019.

You can join the discussion on AMD's impressive Q4 financials on the OC3D Forums.

Dawelio
Very impressive to see that they have changed their economy around, glad to see this and I'm happy I went with AMD to support them

WYP
2018 should be the first year where AMD is profitable throughout, especially if Raven Ridge gets picked up by more OEMs and EPYC gains more market share.Quote

g0ggles1994
I genuinely hope this is just the beginning of something great, especially considering the RTG restructuring as wellQuote
Reply