16-core processors are coming to AM4

We all knew this was coming. As soon as AMD semi-confirmed that their Zen 2-based Ryzen processors could feature two chiplets we knew that 16 core CPUs were possible on AM4. Now AMD has officially revealed their first 16-core AM4 processor, the Ryzen 9 3950X.

The Ryzen 9 3950X name harkens back to AMD's Threadripper 2950X and 1950X, but with this generation, AMD is offering higher clock speeds, a lower TDP and superior IPC than the company's older 16-core Threadripper offerings. In short, Zen 2 is an astounding architecture, and with this architecture, AMD aims for performance leadership.

While most of AMD's Ryzen 3rd Gen lineup will release on July 7th, AMD's 16-core model requires a little bit more time to prepare. AMD plans to launch their Ryzen 9 3950X this September for $749. This processor offers the highest boost clock speeds of the Ryzen 3rd Gen lineup, making it the fastest single-threaded consumer processor that AMD has ever made.

Below are the processor's specifications. 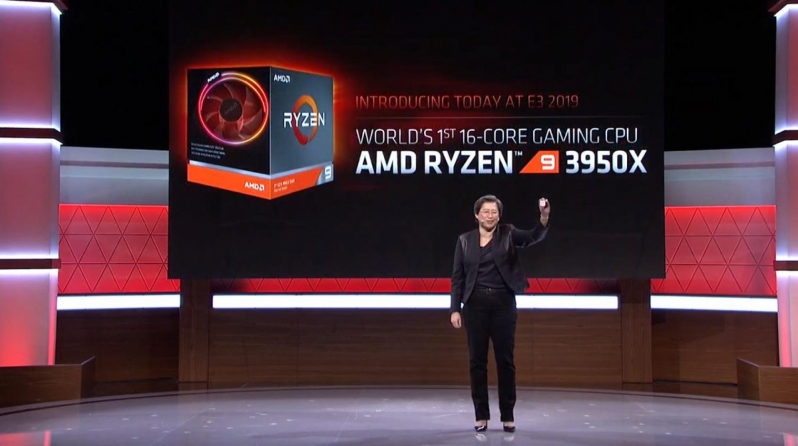 Dawelio
I mean, how much does 8c/16t and 300MHz more in boost clock, actually do in terms of raw fps/gaming performance and overall daily consumer computing make?...

Why go with this over the 3700X for example? Which has an killer TDP as well?Quote


In consumer computing and gaming, no reason to buy more than 6/12 or 8/16.Quote

Linchpin
They're calling it a gaming CPU but unless you're into some sort of content creation as well you'll not need this many cores and threads for years by which point something better will be available for less money.

Marketing aside it's a good deal for a pretty specific audience.Quote

AlienALX
Yup I figured they were going to create a new price bracket.

Can you tell I did marketing for 2.5 years? Including all if the bummy compulsory seminars?Quote

NeverBackDown
It's a great gaming CPU.

You can stream and high quality and game without a massive loss in fps. You still lose quite a bit of performance even with 8 core Ryzen or even the 8700k. The 8 core i9 stuff wouldn't be different.