This places AMD is a strong position, with new architecture on the CPU and GPU sides of the market, granting the company an opportunity to gain market share and sales growth in the client, and enterprise markets.

At both E3 and Computex 2019, AMD is set to reveal more information about their next-generation products, with the company's Ryzen 3rd Generation processors allegedly bringing higher clock speeds, boosted IPC and more cores into the consumer market. If these rumours are correct, AMD's processors will set AMD up for an incredibly successful 2019.

Little is known about AMD's Radeon Navi graphics cards, but the company's "AMD Radeon VII + 'Navi'" slide suggests that the Radeon VII will be available concurrently with Navi on Q3, suggesting that AMD's initial Navi series graphics cards will offer less performance and aim at the mid-range of the GPU market. In effect, this means that we shouldn't expect Navi to be an RTX 2080 Ti competitor. 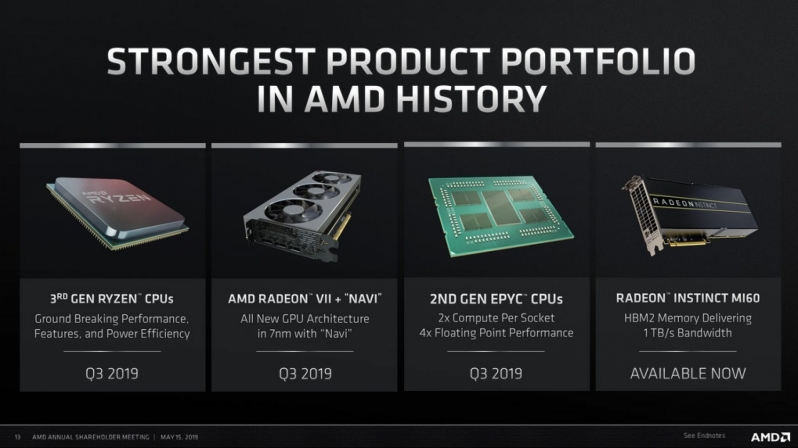 AMD's Q3 listings confirm that the company's Zen 2 and Navi products won't be released until, at the earliest, July 2019. On the graphics side little is known about Navi, though we hope that the architecture will be able to bring competition back to the GPU market, which has been dominated by Nvidia, on PC, for quite some time.

You can join the discussion on AMD's Ryzen 3rd Gen, EPYC 2nd Gen and Navi products releasing in Q3 2019 on the OC3D Forums.

Dicehunter
I reckon we'll be seeing something that surpasses Radeon 7 in Q1 next year, Hopefully by a good margin.Quote

Bartacus
Bring it on, I likes me Ryzens!! And now that I've seen what a Radeon 7 can do, I'm actually interested in their GPUs again.Quote

AlienALX
Navi already looks like it's hot and uses tons of power.

Ed, unless that's the 7 in the pic... but I keep seeing that cooler when reading about Navi lol.Quote
Reply