AMD has now launched their new EPYC series of processors, offering everything that the server market needs from high core counts, support for large banks of memory and insane amounts of PCIe lanes.

At the time of writing, Intel has 98% market share in the server market but with EPYC AMD plans to change this. With EPYC AMD is focusing on the single and dual socket server market, planning to outcompete Intel with attractive pricing, boat loads of IO connectivity and access to up 16 DIMM slots thanks to EPYC's 8-channel memory support. 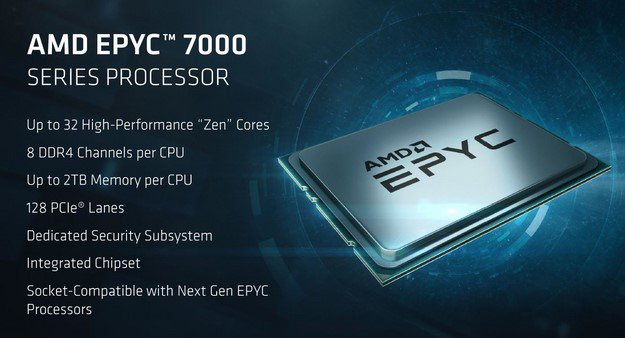 Below is a table that includes pricing for AMD's EPYC series CPUS, with retail availability for their 7601, 7551, 7501 and 7451 CPUs starting today, with the remainder of the lineup launching in July.

The pricing on these CPUs cannot be seen as anything but attractive, with the 8-core, 16-thread variant arriving with a similar price to some of AMD's Ryzen 8-core desktop CPUs. While these server CPUs do come with much lower clock speeds, they do come with 128 PCIe lanes, which will make this price more than worthwhile for many customers.

Below is a table of AMD's single-socket EPYC offerings, coming with similar specifications to the company's dual socket CPUS but with lower pricing on several SKUs.

Below is a table that has been provided by AMD to showcase EPYC's performance when compared to Intel's competing XEON processors, though it is worth noting that AMD has undoubtedly showcased a workload where Ryzen shines. Only time will tell how AMD and Intel compare when wider ranges of configurations are tested by end users. 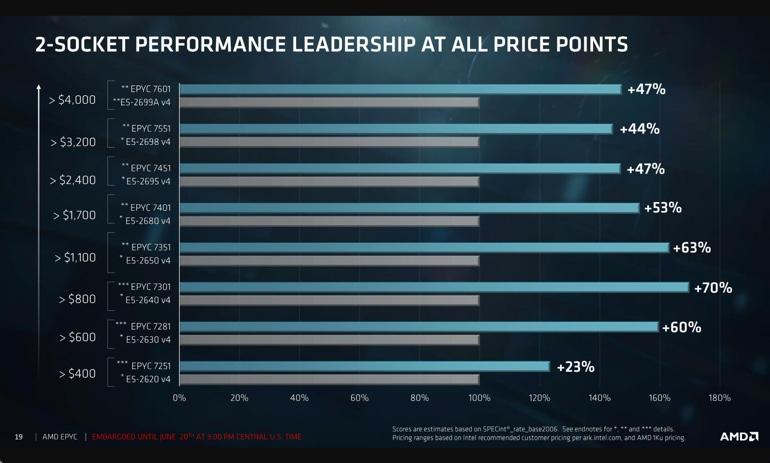 On paper AMD's EPYC CPUs offer a lot of value for money for the server market, ensuring that AMD will be gaining some market share from Intel over the coming quarters.

EPYC's story does not end here, with AMD planning more ambitious Zen 2 and Zen 3 based CPUs in the future with GlobalFoundries' upcoming 7nm manufacturing process. Will AMD be able to dethrone Intel as the king of the server CPU market?

You can join the discussion on AMD's EPYC series of server CPUs on the OC3D Forums.

So yes if you have a uni-processor server you get all those channels but really it's a 40 vs. 64 situation and very few server users use more than 32 or so per socket, we tend to balance devices across CPUs.

Oh and the AMD clock rates are quite slow.

Is there any mention of CPU functions supported by these AMD chips - in particular AVX2 and AES-NI - it they don't support them then many applications will run considerably slower.Quote

barnsley
Quote:
It does support those functions. AMD have supported both since bulldozer at least.

Epyc is supposed to replace existing dual xeons setups with single chips. That is what they seem to be targeting anyway. The price is good and as long as the performance (and arguably Linux support) is good it'll do well.Quote

Chopper3
Quote:
Who's replacing dual-xeons with single AMD though - Everyone i know is looking forward to the Purley Xeons with 28c/56t (and soon 32c/64t), I'll still want two per server.Quote

dario
Quote:
All of us who are interested in price/performance ratio. Just thinking of how much I will save on not having to buy software licences for two CPUs is very exciting!Quote

Kleptobot
Currently AMD's server market share is next to nothing, so as long as they can carve out a profitable chunk then they're doing pretty well.Quote
Reply