AMD launched three processors today, but where is the UK's retail stock?

AMD launched three processors today, but where is the UK's retail stock?

Sadly, if you are in the UK, chances are that you are unable to order any of these processors today. We checked at multiple retailers such as Overclockers UK, Scan U, Ebuyer, Box and CCL computers and none of them had stock of any of AMD's newly released processors.

At Scan UK, the following message is listed for the Ryzen 9 3950X, requesting that customers don't contact them for ETA updates.

THE 3950X IS ON BACKORDER WITH AMD, THERE IS NO CONFIRMED ETA ON THIS PRODUCT. PRE-ORDERING THIS ITEM YOU WILL BE PLACED IN A QUEUE WE ADVISE YOU ONLY PLACE THIS 1 PRODUCT IN A BASKET. ANY PRE-ORDERS WILL BE FIRST COME FIRST SERVED BASIS.

Hopefully, AMD will be able to resolve these stock issues over the coming weeks, as it is disappointing to see a lack of UK availability for such groundbreaking hardware.

You can read our review of AMD's Ryzen Threadripper 3960X processor here. 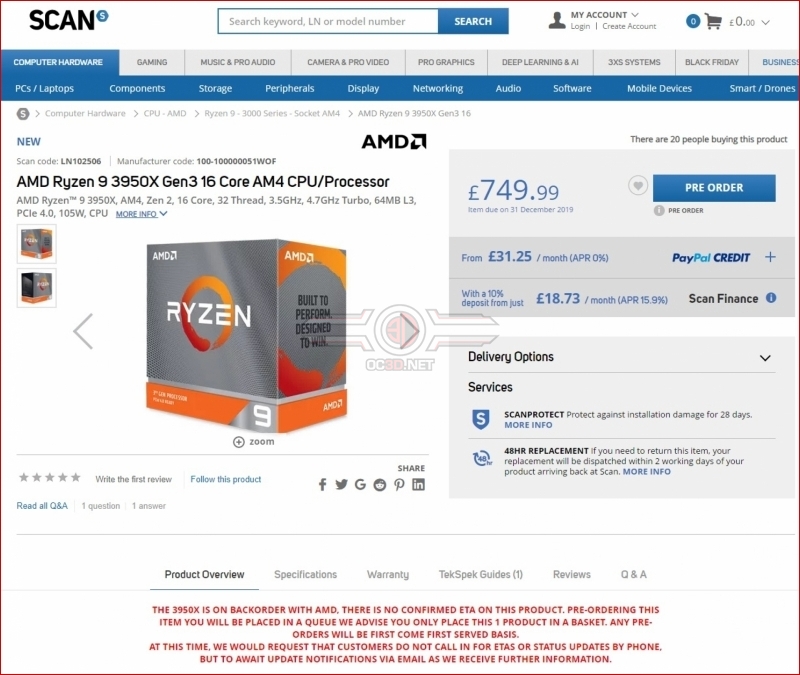 You can join the discussion on the lack of UK availability for AMD's latest Ryzen 3000 series processors on the OC3D Forums.

NeverBackDown
If you thought memory was expensive before.. be prepared for how expensive these HEDT memory focused kits are gonna be

Gambit2K
The two biggest retailers (only ones that got I believe) in Sweden got about 10 chips each of the 3950X, but the 3960X availability was around the 50+ mark.Quote

WYP
Quote:
Looks like you got very lucky.Quote
Reply