The innovation doesn't end with Zen 2 and RDNA.

While both Zen 2 and RDNA both represent significant steps forward for AMD, neither mark the end of the line in terms of progress. Both the CPU and GPU markets can benefit from further innovation, and AMD already has plans to deliver it.

AMD has released new product roadmaps for both their CPU and Graphics architectures, with RDNA 2 and Zen 3 being the next steps forward for the company. Both of these products are designed on a 7nm+ process nodes; and based on the timetables listed, both products will release in 2020.

On the CPU side, AMD is ready for 2022, confirming that their upcoming Zen 3 core is design-complete and ready to hit the market on schedule. Zen 4 is currently in its design stages and is expected to innovate further on the designs of both Zen 2/3, reacting to the downsides of each architecture.

With their upcoming CPU designs, AMD wants to chip away at the performance downsides of their current Zen series CPUs and boost performance further in standard workloads. AMD wants to create stronger general-purpose chips, while destroying "Intel does X workload better" arguments.

Given the roadmap below, we can expect two new Intel core designs before 2022. 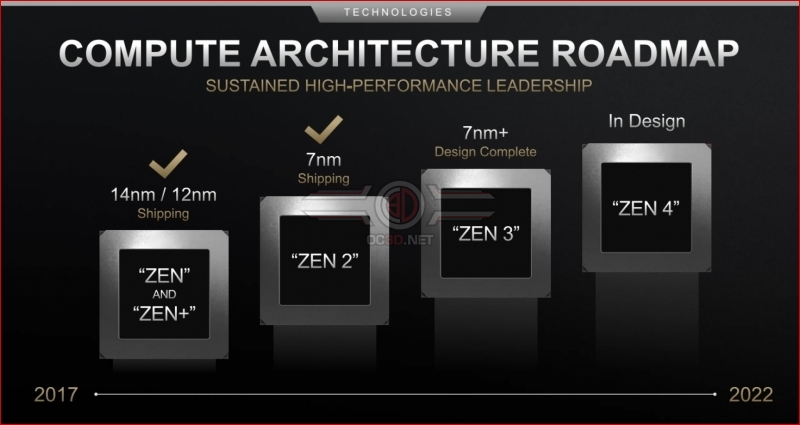 On their Radeon roadmap, AMD has confirmed that RDNA 2 is still in its design stages. Given its use of 7nm+ and the 2021 end date of the roadmap, we can expect RDNA 2 to ship sometime in 2020.

AMD has already confirmed that their "Next Gen RDNA" graphics cards will support "Select Lighting Effects for Real-Time Gaming" with hardware-accelerated raytracing. This means that RDNA 2 will likely ship with raytracing features. Next-generation consoles from Sony and Microsoft are also due to ship with support for hardware-accelerated raytracing, making it more probable that the feature will be included as part of AMD's 2020 GPU lineup. 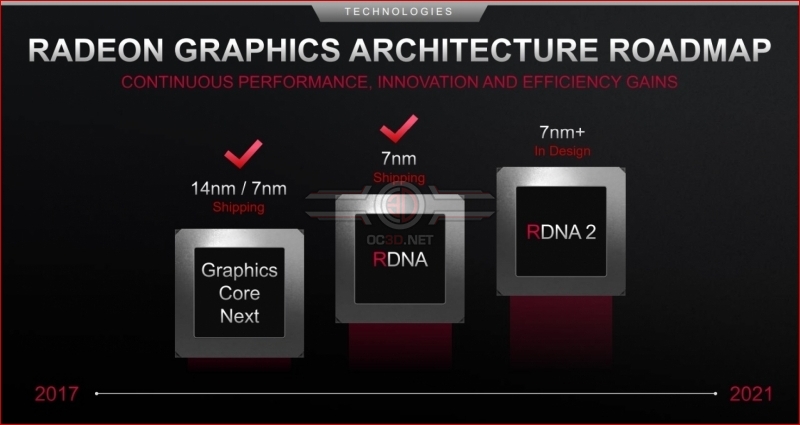 AMD has plans to step past 7nm and their RDNA/Zen 2 architectures. AMD knows that they have no time to stop innovating, especially as Intel moves into the dedicated GPU market and beyond their 14nm Skylake/Kaby Lake/Coffee Lake core designs. Intel is preparing to strike back, and while this strike will take time, AMD needs to be prepared for it. Intel's 10nm delays won't last forever, and when the time comes, AMD needs to be ready.

You can join the discussion on AMD's CPU and Graphics card roadmaps on the OC3D Forums.

RobM
I still feel there will be either a 5800 or 5900 series card or even both by Christmas.

When you look at the the CPU transformation and add in the RDNA they will potentially be able to create an APU that is close to high end.
I see the PC gaming market losing out a lot to consoles if they are as good as I suspect they will be.Quote

NeverBackDown
2020 will be a big year yet again for AMD. Possibly a Zen 3 and RDNA 2 product launch.