Should we expect big things from Zen 3?

AMD's Zen architecture was a gamechanger, injecting some much-needed competition into the x86 CPU market by giving Intel some viable competition. Since then, PC purchasers have been able to get a lot more value for money every year, seeing core counts and performance levels rise to previously unheard of levels.

This week, AMD plans to reveal its Zen 3 architecture. On October 8th, AMD plans to host a Zen-focused event at 12 PM EST, 5 PM BST and 6 PM CEST, where Lisa Su and other AMD executive plans to discuss the company's "next-generation Ryzen Desktop processors".

So far, AMD's marketing efforts for Zen 3 have been focused on two things, Gaming and Content Creation. AMD has teased that they have "big things on the horizon for PC gaming," that they will be "taking its PC gaming and content creation leadership to new heights," and that "AMD Ryzen is a complete package of performance and technology leadership".

Every new generation of Zen processors has delivered enhancements which benefit gamers, from the clock speed enhancements and lowered cache latencies of Zen+, to the IPC, clock speed and cache structure improvements of Zen 2. AMD's Zen 3 architecture will deliver their Ryzen brand another leap in gaming performance, and AMD is confident that their latest architecture will be a big deal for the PC gaming market.

If AMD can deliver further gaming-focused improvements to its Zen 3 architecture, it is possible for AMD to definitively take the so-called "gaming crown" from Intel. Such a shift would guarantee strong sales for AMD's future products, especially if Intel is not quick to deliver their own next-generation desktop offerings.

AMD's Zen 3 teaser ooze confidence, and on October 8th, we will finally see AMD's Zen hype train reach the station. The only question now is if AMD will be able to meet the high expectations of their consumer base. 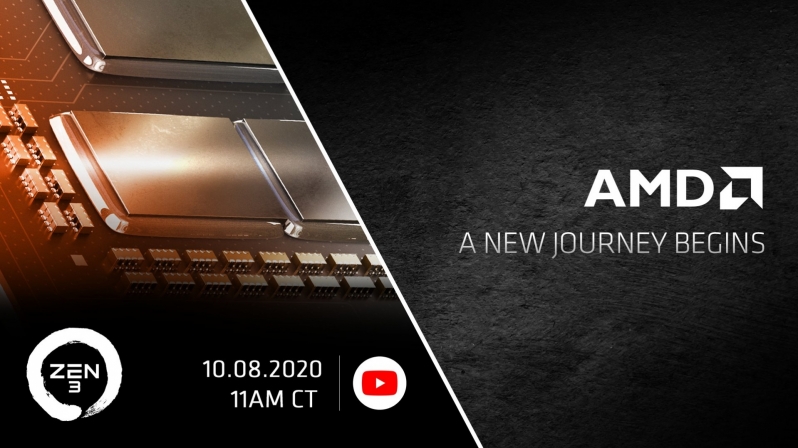 You can join the discussion on AMD's Zen 3 gaming teasers on the OC3D Forums.

Dicehunter
I'd be quite interested to see the game perf difference at 3440x1440.Quote

Dicehunter
Quote:
Or does it run really fast ?

AlienALX
Quote:
It does both if you sleep all day, hippy.Quote