AMD has reportedly started sampling quad-core Ryzen CPUs without hyperthreading, which should compete with Intel's i3 and i5 CPU lineup.
This CPU will have four cores and four threads, which is the same as modern Intel i5 series CPUs, which should allow AMD to deliver some very competitive performance given the high IPC of AMD's Zen architecture. To compete with Intel's i5 series CPUs AMD will have to deliver this CPU with some very low prices, especially given how high modern Kaby Lake CPUs can overclock.
At this time we do not know if AMD will be selling Ryzen CPUs with less than four cores, as it is expected that AMD's Bristol Ridge APUs will make up AMD's lower end CPU offerings. 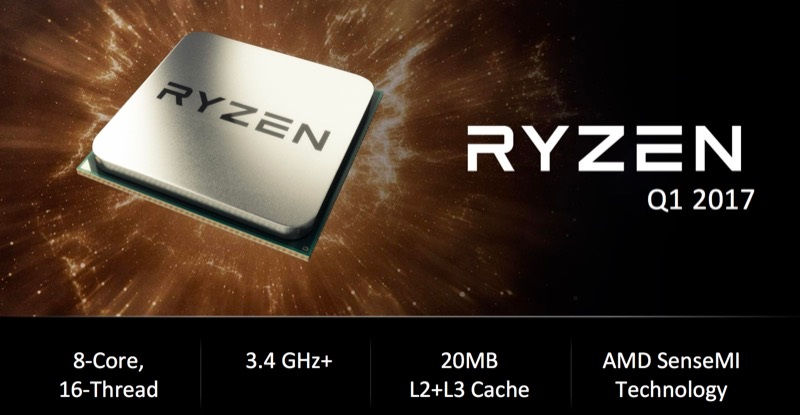 Right now it looks like AMD will be launching their Ryzen CPUs at or before GDC 2017, which takes palace between  February 27th and March 3rd. At this time it is expected that this will be a paper launch, with no retail availability, though AMD could surprise us here.

You can join the discussion on AMD's quad-core quad-thread Ryzen CPU on the OC3D Forums. Find all of the latest PC hardware and gaming news on the OC3D Homepage.

Shingara
Seems strange that the 4 core wouldnt have hyperthreading, i would have thought that would be a great feather in its cap, espec as there isnt anything stopping these running in an x370 board.

Would they do this simply from a cost point of view ?Quote

nogaii
Quote:
Probably this would be the lowest possible configuration, I think, there will be 4C 8T CPU too.

But what do I know?

Daiyus
Quote:
I hope so too. The way I can imagine it happening is there'll be a line to match each Intel Kabylake tier:

CRITICALThinker
Quote:
I have a feeling you aren't far off, but I think they are going to match i3 with 4C4T, and go from there up to x99 i7 matching with the 8C16T. It would appear that the 10C20T i7 remains at the top though, unless AMD plans to introduce a HEDT line in the future.Quote

Dawelio
Quote:
Yeah, well how many people has or will actually buy that? Not that many people I reckon...Quote
Reply