At ISSCC 2020, AMD has highlighted many of the design innovations offered by their Zen 2 CPU architecture, the core design which underpins the company's innovative Ryzen and EPYC processor lineups.

The highlight of AMD's Zen 2 designs aren't the cores themselves, but how they are connected. On desktop and server platforms, AMD took a chiplet approach with Zen 2, splitting their processor designs into multiple silicon dies. Thanks to this, AMD has confirmed that they can make incredible cost savings over traditional, monolithic processor designs, something which has granted AMD significant price/performance advantage over Intel.

When looking at AMD's slides, which come via PC Watch, the company highlights that a 64-core processor would be impossible with a single 7nm monolithic design. Beyond that, with their 16-core, 24-core, 32-core and 48-core models, AMD has claimed that their silicon costs would be roughly 2x higher if they were to take the monolithic approach. Combine these two factors, and it's clear that AMD's chiplet approach has allowed the company to create larger processors at a significantly reduced die cost. 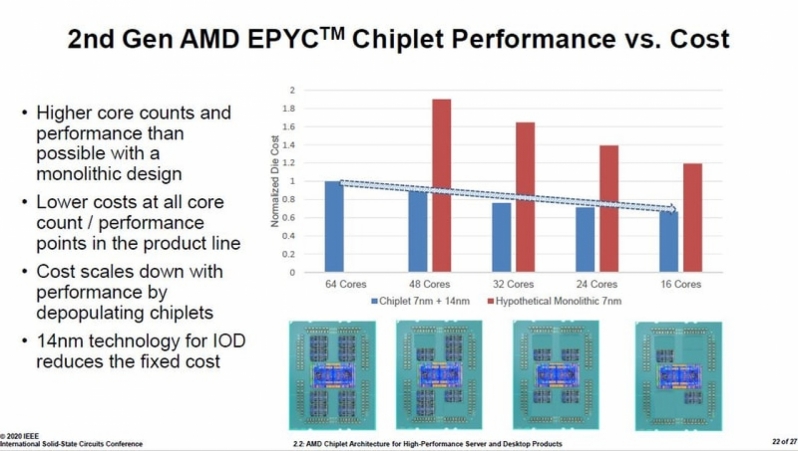 When moving to AMD's Ryzen desktop lineup, the company has also confirmed that its chiplet approach has resulted in significant cost savings for both its 16-core and 8-core CPU models. For its 16-core processor, the Ryzen 9 3950X, AMD claims a cost advantage of over 2x when compared to an equivalent, monolithic processor. When moving to AMD's 8-core processors, which use two silicon dies instead of three, AMD sees smaller cost advantages which are nonetheless significant to the company's bottom line.

AMD's chiplet approach is what has allowed AMD to release its Ryzen 3rd Generation processors with such affordable pricing, all the while maintaining high margins at retailers. Even on the low-end, AMD's multi-die approach is delivering cost savings, and that's only going to become more significant as AMD starts shipping its processors in larger volumes. 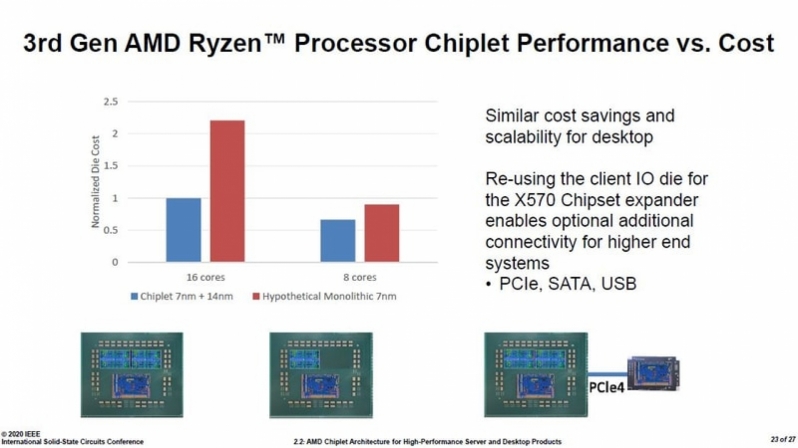 Moving forward, large scale processors will all move to chiplet-based designs. The disadvantages of multi-die architectures are nothing when compared to the cost benefits that they also provide. AMD has proven that multi-die processors can provide industry-leading performance, making it only a matter of time before other manufacturers follow suit.

You can join the discussion on AMD's cost-effective chiplet CPU designs on the OC3D Forums.