At CES 2019, Microsoft confirmed that they plan to continue working with AMD on future products, an indication that the next-generation Xbox will be another AMD powered system.

For future consoles, AMD has plenty of hardware upgrades that Microsoft can choose from, with an upgrade from the Xbox One's Jaguar CPU core to the company's new Zen architecture sitting high on the consoles upgrade list. On the graphics side, Microsoft also has the option to adopt Radeon's planned Navi architecture, taking on Vega's useful traits in the process, such as 2x FP16 computational throughput, what AMD calls "Rapid Packed Math".

TUM_APISAK, a well-known leaker within PC hardware circles, has revealed a new chip called AMD Gonzalo, a new gaming chip that could act as the base of a future console.

The AMD 2G16002CE8JA2_32/10/10_13E9 code can mean many things, but based on older AMD products we can guess that the "G" stands for gaming, with the D in older AMD product codes referring to Desktop, M for Mobile, etc. The 32 likely stands for a boost clock speed of 3.2GHz, while the 10_13E9 is a potential reference to a Radeon graphics chip, with TUM_APISAK referring to it as Navi 10 Lite.

At this time it is unknown whether or not this chip is based on AMD's Zen 2 architecture, but the Gonzalo code refers to a processor with eight cores and an unknown L3 cache size. If this product is 7nm, the use of Zen 2 cores is more likely.

Rumour has it that Sony was a major investor in the development of AMD's Navi GPU architecture, making it possible that this silicon could be the baseline for their PlayStation 5 console. 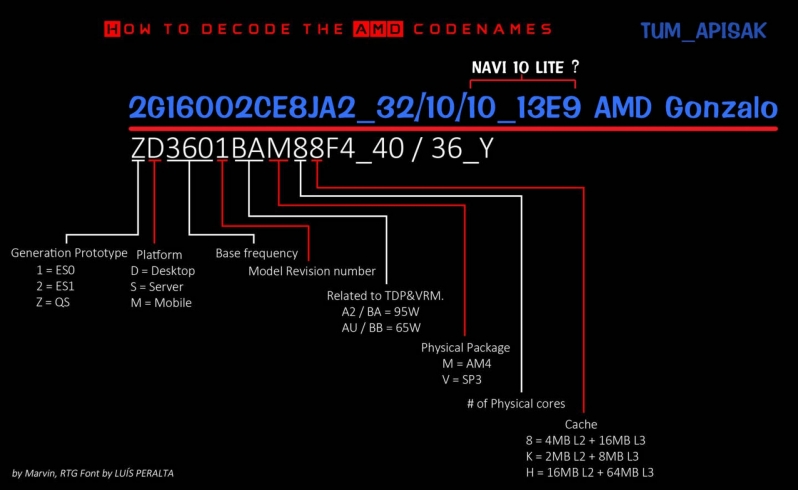 Microsoft confirmed that they were working on a next-generation Xbox at E3 2018, making it possible that the company will reveal more information about their future hardware plans at E3 2019. This would add a lot more context to Microsoft's presence at AMD's CES 2019 keynote, though it is possible that Gonzalo is a product design for another manufacturer.

For those that say that Gonzalo's 3.2GHz boost clock is low for Zen, remember that consoles are designed to produce relatively little heat and sit inside moderate power envelopes. The Xbox One S has its CPU clocked at 1.75GHz while the Xbox One X has its CPU clocked at 2.3GHz. This makes a Zen processor that can boost a 3.2GHz a colossal improvement for consoles in pure CPU power, both architecturally and in terms of raw clock speeds.

You can join the discussion on AMD's rumoured Gonzalo Gaming APU on the OC3D Forums.

tgrech
I guess this could also be for a console for an emerging market, like the Subor Z+'s Zen+Vega20+GDDR5 APU (Linus had a hands on video recently)Quote

Bagpuss
Looks like the next gen of consoles will see a balancing take place.


BIG increase in CPU power but not so much in GPU grunt. (compared to the PS4 Pro & One X).


8 Zen 2 cores at ~3GHz and a 1080Ti class GPU (10-12Tflop) should ensure a solid 60fps at 4K (native) in most games or 60fps at 4K( with chequer-boarding reconstruction techniques) in the most demanding of Triple A titles.Quote

WYP
Quote:
TBH, I think the PS4 Pro is a big sign for things to come. If reconstruction techniques can deliver a "faux-K" result that looks similar enough to 4K for most people not to notice, it is definitely something that is worth getting behind, especially given the performance benefits.

While it is hard to know what will happen to things like Nvidia's DLSS technology, it is definitely possible that we will see a similar technology take hold in the coming years.

The CPU upgrade will be a big thing for next-gen, as it will allow developers to create more complex titles. Yes, more GPU power is great, but extra CPU power will help push things in other directions, outside of resolution targets.Quote

NeverBackDown
CPU/Memoryis pretty much always more important in most scenarios. It would be nice to get an actual 8C/8T CPU instead of 4C/8T design. However I have a feeling that one of the 2 companies will go with 4C/8T. But if the PS4/Xbox launch are anything to go by, power wins the initial race. People who are spending similar amounts of money on 2 consoles will choose the better graphics one because most people play COD anyway lol

I think whoever has the stronger CPU will win the initial launch. I suspect both will have similar GPUs again.Quote

tgrech
Well GPUs are the part they can play with easily in mid cycle refreshes or even premium models closer to launch, with CPUs you're much more limited in that area if you wanted to maintain back+forward compatibility across a lineup so I think that's the area they'll focus on in the first consoles of the generation, 6-8 cores(They like to have one or two disabled with more progressive nodes to ensure string yields) presumably with SMT enabled, but GPUs that aren't much more powerful than the mid cycle refresh consoles but use more modern features, maybe one of them will launch a large GPU versions alongside this time to offer a generational leap in graphics too but they may prefer to wait till 7nm is more mature & not saturated with their other products.Quote
Reply