The time has come, AMD has finally started to release information about their 7nm Zen 2 CPU architecture, revealing a radically new CPU design for EPYC as well as significant changes to AMD's Zen processor microarchitecture, which are designed to increase their performance per clock and offer increased performance per watt.

For starters, let's talk 7nm, which offers a 2x increase in transistor density when compared to 14nm, while also offers a 50% power reduction when used at the same clock speeds or a 25% speed increase with the same power consumption levels as 14nm, and that doesn't include the changed that will be delivered by Zen 2's enhanced design.

On the core side, Zen 2 offers a redesigned execution pipeline, featuring an improved branch predictor, a re-optimised instruction cache, better instruction pre-fetch and a larger Ops Cache, all of which will help increase Zen 2's IPC (performance per clock).

Zen 2 will also offer double the floating point performance of Zen, supporting 256-bit floating point calculations, which is a major stride for AMD, as AVX support is a strong point for Intel processors. AMD also promises stronger mitigations for Spectre, as well as support for what AMD calls 2nd Generation Infinity Fabric.

Sadly, AMD didn't discuss performance numbers for Zen 2, though with what AMD has disclosed we can expect increased AVX performance, higher clock speeds at each stage of the power envelope and increased performance per clock in certain workloads.

And now for Zen 2's BIG changes, especially on the EPYC side. The image below showcased a mock-up for Zen 2 EPYC, which seeming features eight memory channels, just like today's EPYC processors. What you will see below is that Zen 2's design is more modular than Zen. with I/O and CPU cores sitting on separate dies, allowing I/O silicon to be created on low-cost 14nm technology while focusing their CPU designs on high-density/high-performance 7nm silicon.

In AMD's mock-up, they have two 7nm CPU core "Chiplets" that are connected to a single 14nm I/O die, though at this time it is unknown how many CPU Chiplets Zen 2 EPYC will support or how many CPU cores will be supported on each Chiplet. This is a revolutionary design for a CPU, and could address the memory locality issues that are seen in today's EPYC and Threadripper processors.

Looking at this slide we can see eight infinity symbols on the 14nm die, which could be seen as a hint that AMD plans to connect eight separate CPU chiplets to their Zen 2 EPYC I/O die. If this is true, eight 8-core Zen 2 chiplets would give Zen 2 EPYC a maximum core count of 64.

Update - AMD has confirmed that Zen 2 EPYC processors will offer a maximum core count of 64 per socket and that they will use eight CPU dies that offer eight cores each to achieve this feat. 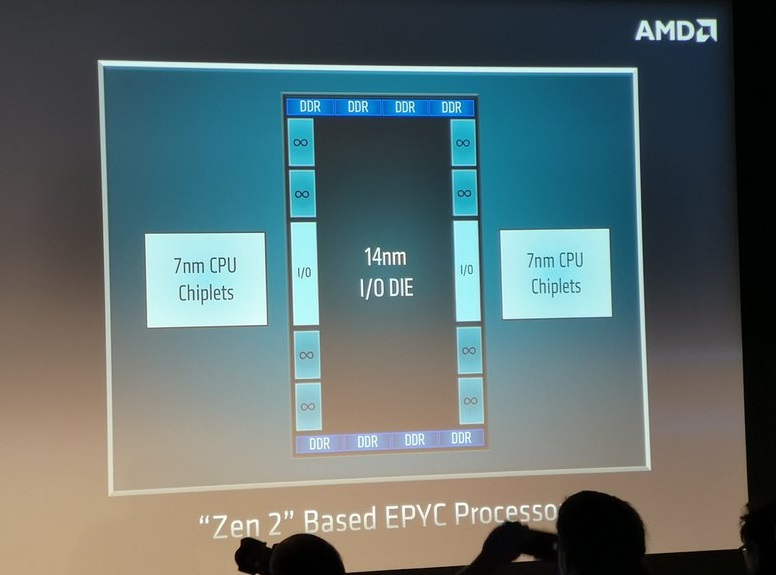 Looking into the future, AMD expects 7nm+ Zen 3 to release in 2020 and states that "Zen 4" is "In Design" stating that the company has an "aggressive roadmap".

You can join the discussion on AMD's 7nm Zen 2 architecture and Next-Generation EPYC on the OC3D Forums.

NeverBackDown
Link is broken Mark. It ask for sign in and password.
https://www.overclock3d.net/news/cpu...eration_epyc/1
That is the correct link

As for the information in the article. It is pretty darn impressive imo. AVX support alone is a MASSIVE benefit for server workloads it should really help them penetrate further into the high margin markets.
As for everything else, it is nice to see AMD taking radical designs and making them workout. It has helped them with Zen and taking it a step further with Zen 2 shows the engineering talent they still have. It also shows how bad Intel have been caught sitting on their laurels.

Now if only they can apply this same engineering to GPUs.Quote

tgrech
Could this be a taste of what "scalability" meant for Navi too? Will this allow the consoles and APUs to maintain their hUMA architecture while moving beyond the cost and size limitations enforced by single-die/single node APU designs?Quote

AngryGoldfish
Just musing here... I wonder whether Navi's "scalability" will come later. As in, the first run of Navi will replace the RX 580 (well, 590 I guess) in mid 2019 after Zen 2 has had its time. And then in late 2019/early 2020, Navi will jump to 'doubling' the same core they've been selling and doubling the performance. So, if the most recent rumours (and combined with the original one where Navi was going to bring GTX 1080 performance to the $300 price point) are to be taken into account, that the working Navi silicon is exceeding expectations and is faster than a GTX 1080 slightly (hypothetically), doubling that would give you RTX 2080 Ti (faster in fact) performance levels. And it could be (again hypothetically) $600. Oh, the dream. $600 is the sweet spot. But actually $600. Not this fake $600 that's actually $750.Quote

NeverBackDown
Navi is definitely on the path of using 'chiplets' (or similar variant) like Zen. It's just a matter of performance and power consumption. That's all people care about at this point. Price hardly matters anymore when everything is so expensive,AMD won't have much trouble competing there.Quote
Reply