Did AMD hand China the keys to the US' x86 technology?

Back in 2016, AMD created an IP licensing agreement and a joint venture with the Chinese company Sugon to create THATIC, a company which would create processors that are based on AMD's Zen technology while also offering some custom add-ons that suit the Chinese market.

With the deal's announcement, AMD received $293 million as an upfront payment, with the promise of royalties with every processor that was sold after that date, netting AMD additional revenue at a time where the company was in dire straights.

Last week, The Wall Street Journal alleged that AMD game China the "keys to the kingdom" for the US' x86 technology, but AMD has a different story, highlighting details which the publication got wrong while also revealing that the chipmaker received clearance from the US Government to go through with the deal.

The Wall Street Journal claims that the US can no longer shut the door on China when it comes to computer processor technology because Chinese versions of AMD processors are not "rolling off production lines". The publication also alleges that AMD has been "helping China in its race with the US to build the first next-generation supercomputer - an essential tool for advanced civilian and military applications."

Below is AMD's response to The Wall Street Journal's allegations, which confirms that AMD received no objections from any US agency when it came to the formation of their THATIC joint venture, including the US Department of Defense and Department of Commerce. AMD also highlights that steps were taken to prevent China from reverse engineering AMD's core designs and to prevent the misuse of AMD's IP.

AMD has released the following statement regarding a story that appeared on The Wall Street Journal website on Thursday June 27, 2019 entitled “How a Big U.S. Chip Maker Gave China the ‘Keys to the Kingdom’”.

The Wall Street Journal story contains several factual errors and omissions and does not portray an accurate picture of the joint ventures that AMD entered into with THATIC in early 2016.

AMD takes strong exception to characterizations in the story that it did not act properly or transparently in creating the joint ventures.

The Wall Street Journal story omits important factual details, including the fact that AMD put significant protections in place to protect its intellectual property (IP) and prevent valuable IP from being misused or reverse engineered to develop future generations of processors.

AMD’s belief is that it did everything correctly and transparently in interactions with the US Government in advance of and since forming these joint ventures. We recognize that there are increased sensitivities and concerns today around national security and technology.

In compliance with the amended U.S “Entities List,” AMD has restricted the sale and purchase of products and taken steps to ensure that no technology transfers occur to listed entities.

As a company, AMD strictly complies with all U.S. laws, and cares deeply about the national security interests of the United States. The company will continue to work with the U.S. Government and others to ensure strong protections of intellectual property and best practices in corporate citizenship and transparency. 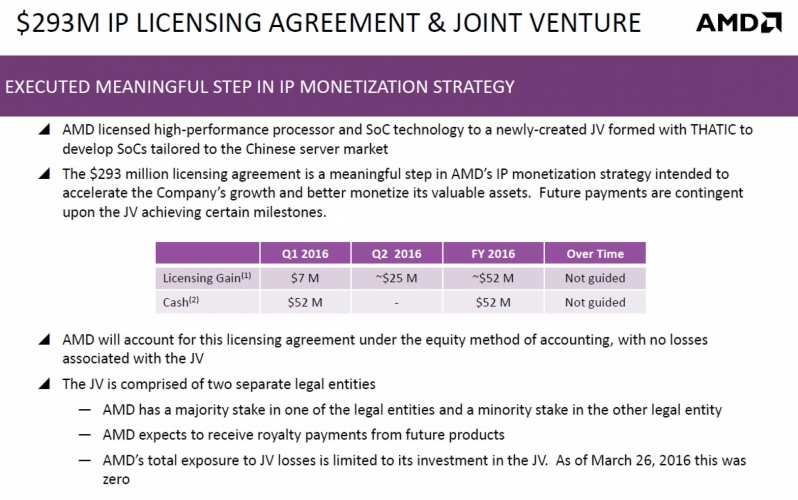 AMD's belief is that their actions were taken with the consent of the US government, stating clearly that they complied with all US laws and created their joint venture after briefing all appropriate agencies.

Last month, AMD confirmed that their dealings with China only applied to the company's Zen series of core processors, which means that THATIC does not have access to AMD's Zen 2 or future processor technologies. Beyond that, AMD has not revealed any plans to transfer any more IP to the joint venture.

You can join the discussion on AMD denying claims that they have handed the "keys to the [x86] kingdom" to China on the OC3D Forums.

demonking
Typical WSJ, best use of their writing would be for fiction.
The thing with this sort of thing is you either licence it or wait for your tech to be copied, repackaged and then sold over here cheap. Right move IMO.Quote

tgrech
As far as we can tell and going from the products released, this licensing agreement was at the mask set & wafer level, rather than the HDL level. So a software analogy would be, this is like them sharing some binary data blobs rather than the source code(And they just thrown their own cryptographic unit on alongside). Attempting to reverse engineer the technology without the HDL for something that contains millions of logic gates would be pretty insane to attempt even for the Chinese.Quote

smilertoo
I wonder if we would see some Intel execs fingerprints behind this story.Quote

tgrech
Nah, Intel have nothing to gain and lots to lose from stories like this, they've taken a lot of flak themselves from the US govt. over their deals with China. They seem to be going for more or less all the high value companies & industries in this trade war and it's undoubtedly harming both sides in the lost trade & sharing & progression of technology.Quote
Reply