AMD confirms that Zen 5 is already in development

AMD confirms that Zen 5 is already in development

AMD's Zen 2 processors already offer impressive performance figures, but that doesn't mean that the rise of Ryzen has to stop there. AMD plans not only to be competitive but to become performance leaders in the x86 CPU market. With this in mind, AMD needs to think big when it comes to its Zen 2 successors.

It has already been confirmed that AMD's Zen 3 core is "design complete". This means that AMD Zen 3 core architecture has been locked down; and that AMD is now moving into their testing and manufacturing stages for Zen 3. Now, AMD's core design teams are preparing for both their Zen 4 and Zen 5 architectures. AMD has confirmed both architectures are "in the design phase" during their Horizon Executive Summit in Rome, Italy.

AMD's Zen design teams work on a leapfrogging basis. One team works on their next-generation CPU architecture while the other works on next-next-gen hardware. Now that Zen 3's design is finished, AMD's engineers have moved to Zen 5, a CPU architecture that's due to release in 2022.

One thing to note about AMD's design teams is that core architecture improvements can be transferred from one architecture to another in some cases. For example, some changes to Zen 2's branch predictors were due to release with Zen 3. This design feature moved forward into AMD's Zen 2 core, thanks to the fast work fo AMD's Zen 3 team. Similar improvements may also have been moved from Zen 4 to Zen 3, highlighting how closely AMD's design teams can work.

When speaking at previous EPYC events, AMD stated that they were listening to feedback from their customers and are using that feedback to guide the development of future Zen architectures. This will help make AMD's Zen cores better suited to a wider range of workloads, and see where customers see the need for increased CPU performance. 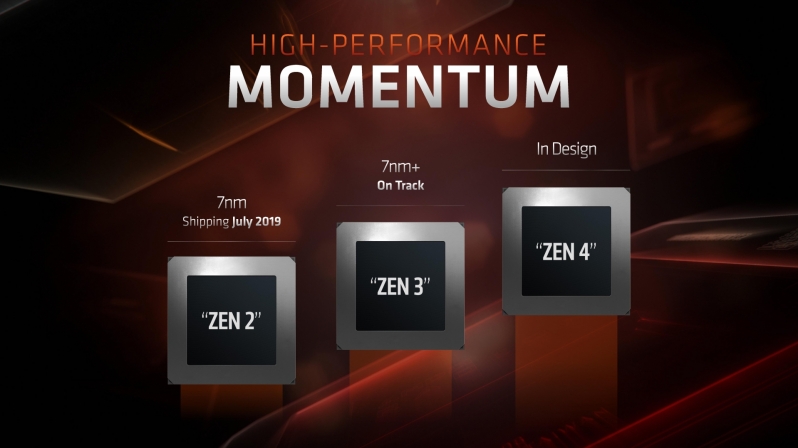 AMD hopes to create a strong brand with Zen, Ryzen and EPYC, 1-upping Intel by offering customers a clear roadmap while continuing to execute on its promises. AMD wants EPYC to be a brand that customers can rely upon in 2022 and beyond.

While AMD is working on bringing 3rd Generation EPYC and 4th Generation Ryzen processors to market in 2020, the company's design teams are busy working on the two product generations thereafter. With this in mind, we can be confident that AMD has plans to deliver increases to CPU performance for the foreseeable future, which is great news for the PC market.

You can join the discussion on AMD's work on their Zen 5 CPU architecture on the OC3D Forums.

RobM
I wonder which Zen gets the 4 threads per core, hoping next genQuote

grec
Zen3 doesn't look like it'll be that much wider of an arch, with the rumoured IPC gains the unit allocation probably hasn't changed significantly, and I don't think 4-way SMT would make much sense if it wasn't alongside a significant increase in execution units within the core. If it was coming I'd assume it'd have to be with a full node shrink, Zen4 possibly if it is coming as by then Intel will be also be going large core-wise across the stack assuming some derivative/successor of Ice Lake is ready for prime time.Quote
Reply