AMD's showcased their Ryzen 3rd Generation technology for the first time at CES 2019, matching the performance of Intel's i9-9900K with a pre-production chip while consuming 30% less system power, all while hinting that they were holding back, with reports quickly spreading that AMD's Ryzen 3rd Generation will offer up to 16 cores on the company's AM4 platform (more info here).

When looking at the chip design that AMD showcased at CES, most analysts agreed that the company plans to offer products with two 7nm CPU dies, delivering a total of sixteen cores and thirty-two threads on a single AM4 socket processor. Some also alleged that AMD was planning to offer an APU with the same basic design, combining a 7nm CPU chiplet with a 7nm graphics chiplet to deliver a next-generation APU from the company.

Anandtech's Ian Cutress has confirmed that AMD has no plans to release an APU using their multi-chip technology this generation. AMD's APUs are designed for mobile applications first, making a model that combines eight Zen 2 cores with a large graphics chip surplus to the requirements of mobile platforms. For their Zen 2-based APUs, AMD plans on using a design that is different to their GPU-less, desktop-grade Zen 2 processors.

It was also confirmed that AMD's Zen 2 Matisse processors will be designed to fit into the same power envelopes as the company's Ryzen 2nd Generation processors, which means that TDPs will max out at around 105W while low power models could feature TDPs that are as low as 35W. 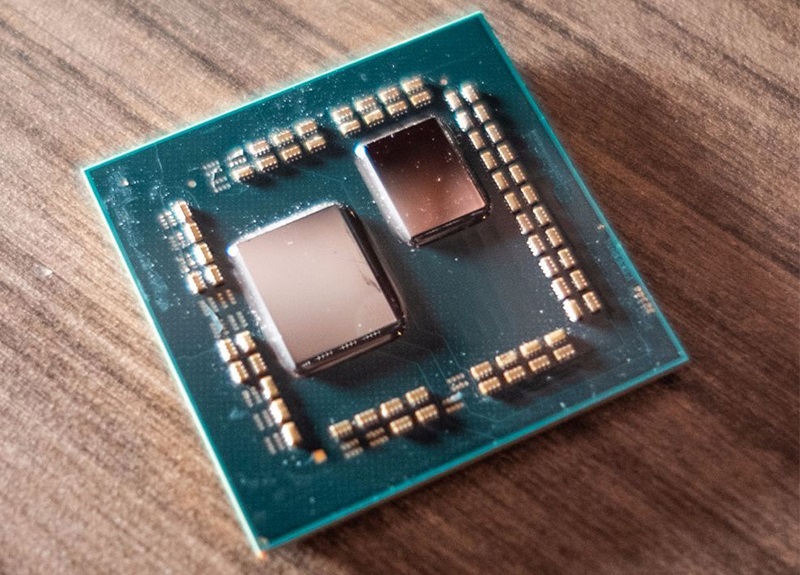 AMD's Zen 2 APUs will release long after their desktop counterparts. AMD launched their 12nm Zen+ APUs shortly before CES 2019, suggesting that we won't see Zen 2-based 7nm APUs hit the market until early 2020.

You can join the discussion on AMD's 7nm APU plans on the OC3D Forums.

NeverBackDown
Well there goes my theory

Guess it kinda just leaves a 16 core left. Though it begs the question if they do this, what do they plan on doing with Threadripper? Keeping a 16C as the low end but offering the full benefit of the threadripper platform?Quote

meuvoy
Quote:
They did exactly that in the first generation with a 8 core 16 thread as the low end threadripper even though you could buy a Ryzen 7 1700 1700x or 1800x with the same amount of cores/threads. They might bump threadripper core count to 32/64 since epyc is gonna have 64/128...Quote

tgrech
Quote:
32 core ThreadRipper was already released last generation (TR 2990WX), they could push to 64 cores in theory with this upcoming gen, they could also delay that move to consumers a gen without much issue.


Quote:
AM4 and TR4 are very different platforms with very different IO & features, so they don't really compete with each other, especially when you consider platform pricing and stuff, and two SKUs with the same core county won't necessarily have the same internal layout to reach said core count across the platforms, the 8-core TR 1900X used two half-disabled dies for instance(To get the full compliment of IO)[There was also a first gen Epyc piece with 4 dies each containing 2-cores but the reasons for that pieces existence are fairly mundane], so if 4 dies becomes the new ThreadRipper norm with 8-dies for the top end we could see a 16 core using half disabled 4 dies for the budget chip or something like that.Quote

tgrech
On topic: I think this will definitely be a technology that comes with the consoles, where it can offer the ability to break free of the GPU size limits imposed by traditional APU designs to keep costs reasonable on larger total die size, also allowing the use of very modern nodes with less risk to easily cram more power into those fairly small TDP constrained boxes, realistically this is also kinda necessary to get a generational performance leap after the mid-cycle refreshes without costing quite as much.

On desktop this doesn't really make sense, because APUs are still pretty much always bandwidth constrained(All the consoles besides the OneS now use GDDR memory instead of DDR), DDR5 would help but wouldn't solve the issue, really the only solution would be on-interposer HBM caches or something, but such an exotic and expensive solution still has little market, as Intels Hades Canyon G which used VegaM+HBM kinda demonstrated despite its reasonably impressive performance.Quote

WYP
Quote:
TBH I think AMD would be foolish to not advocate using the same CPU die that they are using in Ryzen 3rd Gen and Threadripper 2nd Gen on next-gen consoles.

They can promise cheaper manufacturing, ensure higher production volumes for their desktop/server chips and ensure better chip bins by sheer volumes. A multi-chip solution makes sense for next-gen consoles, especially if they want a graphics chip that is a lot more powerful than the Xbox One X.

There is the possibility that the console makers won't like this, as it could basically mean that the Xbox (Two?) and PS5 would offer the same processors, with the only difference being clock speeds, but I think it is a given that they will both use Zen.Quote
Reply