Is this APU going to be a game changer for AMD?

AMD has officially announced their new Ryzen Mobile series of processors, offering a configurable 15W TDP and revolutionary increases in both CPU and GPU performance when compared to AMD's previous generation of APUs.
This series of APUs was formerly known as Raven Ridge and will release with Ryzen 5 and Ryzen 7 variants called the 2500U and 2700U, with both units being designed for ultrathin notebooks, which aim directly at Intel's new 8000U series of processors.

With this new series of CPUs Ryzen is moving into the mobile market, offering highly competitive performance levels for its TDP and an integrated GPU that is powered by AMD's new Vega GPU architecture, which allows it to be powerful enough for light gaming workloads and productivity tasks. 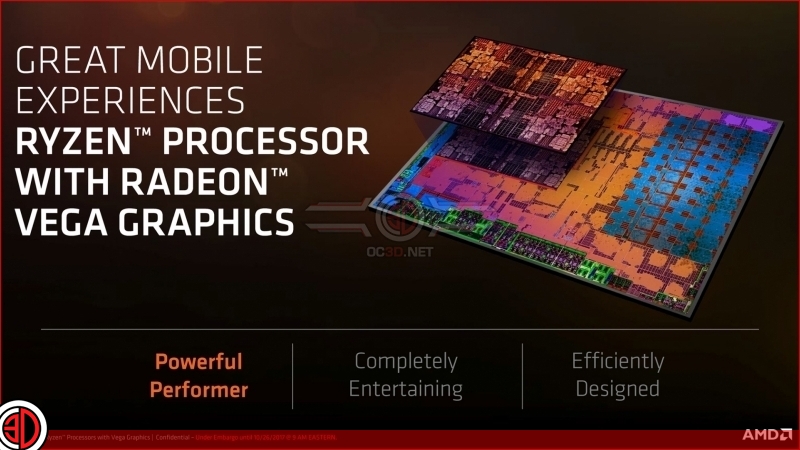 When compared to AMD's older Bristol Ridge series of 7th generation APUs, AMD states that they are able to get up to three times the CPU performance and over two times the GPU performance while also delivering a 58% decrease in power consumption, making Ryzen Mobile seem like the ideal product for the thin and light section of the laptop market. 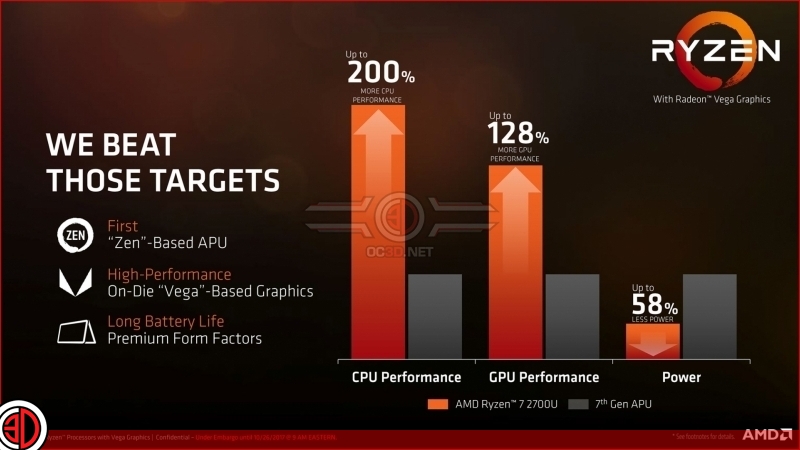 When compared to Intel's new i7 8550U we can see that Intel has a slight advantage in terms of single-threaded CPU performance, with AMD offering much higher levels of multi-threaded performance in Cinebench. This seems to indicate that AMD can boost more cores to higher clock speeds for longer, though this will depend on the configuration of the user's notebook (configured TDP and cooling solution). These factors cause a lot of variation in the mobile CPU market. 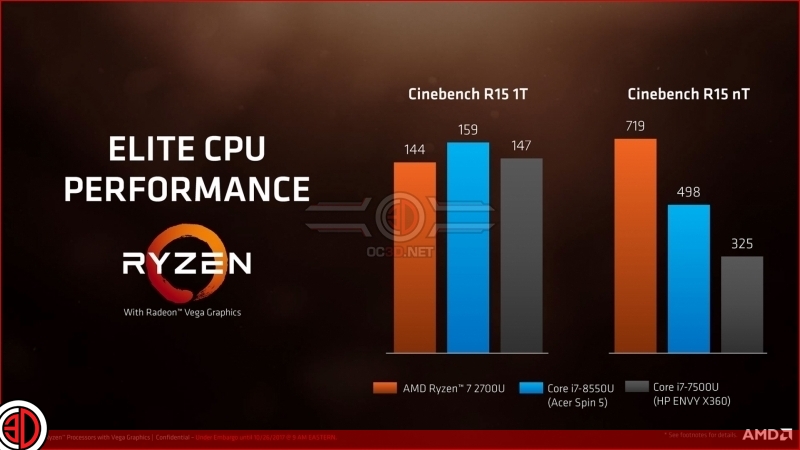 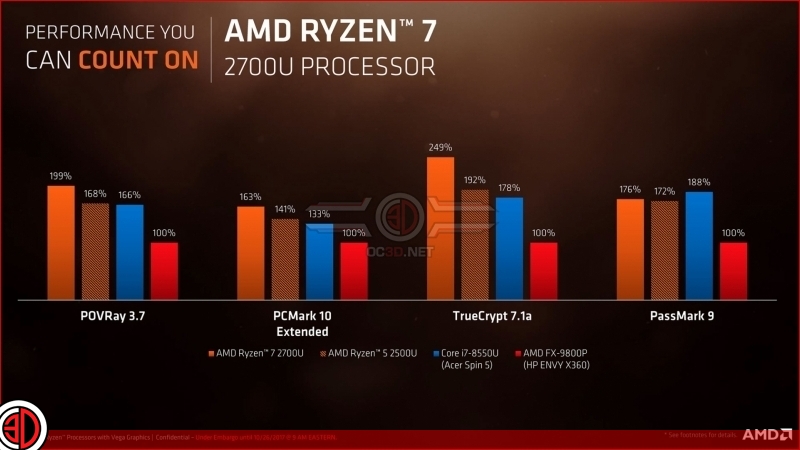 One of the other major draws for Intel's new Ryzen Mobile series of CPUs is its integrated Vega GPU, which allows AMD to offer performance levels that are similar to a system with an Intel Geforce 950M GPU, a dedicated graphics card.

GPU-wise AMD is far exceeding Intel's stock performance, so much so that it is revealing a last-generation Nvidia mobile product. This is a huge step for integrated graphics, especially on a low TDP part like this. 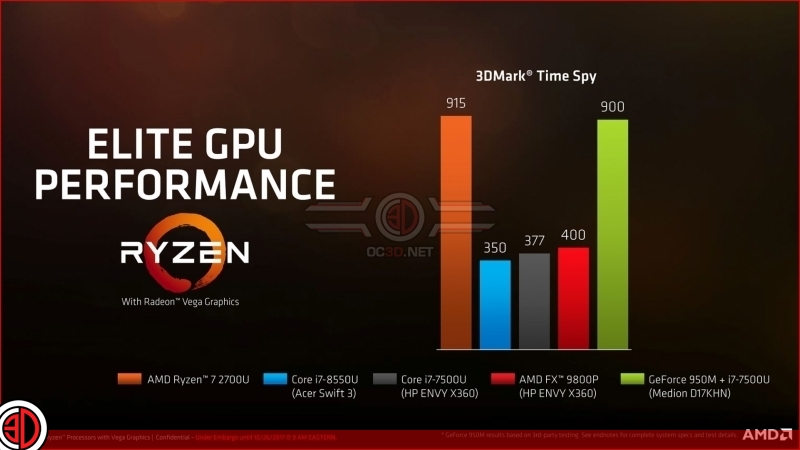 AMD is happy to call this low power product gaming ready, though just like the GTX 950M that it is compared to users will need to sacrifice some graphical fidelity to achieve high framerates. Yes, full on gaming notebooks are available, but don't expect any of them to consume as little power or cost as little to manufacture as an integrated graphics solution. 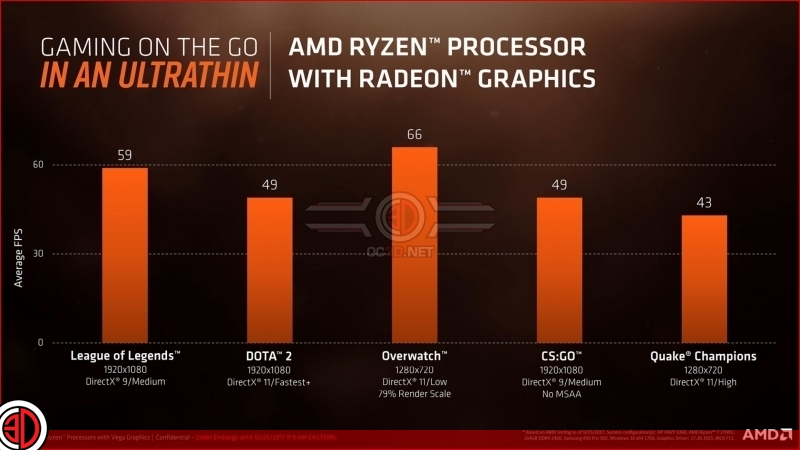 Ryzen mobile is certainly an interesting architecture, offering a compelling mixture of CPU and GPU performance that may finally make AMD's APU dreams a reality. These new chips from AMD have also sparked the interest of several notebook makers, with models from HP, Lenovo and Acer releasing before Christmas and models from ASUS and Dell in early 2018.

You can join the discussion on AMD's new Ryzen Mobile series of CPUs/APUs on the OC3D Forums.

NeverBackDown
It's very impressive. And in a gaming notebook if they OEM decided to make it a 25watt TDP instead of 15watts, it will stay clocked pretty high for quite a while. Really nothing Intel would be able to do.

It's ironic to me that on desktop AMD have a clockspeed deficit and IPC deficit. Yet on mobile they are leading in clockspeeds which also allows them to negate the inferior IPC of Zen, which also means it's a moot point and clockspeed yet again is king. All this while consuming the same power AND providing a far more powerful GPU.

Intel is getting bent here