At the companies 2017 Financial Analyst Day the company announced plans to create their two next-generation CPU and GPU products on a 7nm manufacturing process, with plans to release Zen 2 and Navi on this production node.
AMD has revealed that they are currently using leapfrogging design teams which are designing both next-generation products and next-next generation products concurrently, which means that AMD's design plans extend well into the future.

AMD will be focusing on increased performance and performance-per-watt improvements with each new product design, not only owing these improvements to process node changes but to in-depth design changes at the silicon level.

Sadly AMD did not reveal any of the feature changes that are provided by these new CPU and GPU architectures, though we have already seen with Ryzen that AMD is able to achieve some amazing things when they put their engineers to work. 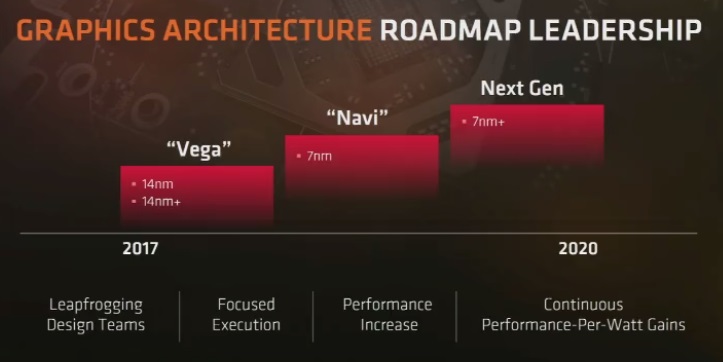 AMD is expected to release two new CPU and GPU architectures by 2020, promising that AMD's product developments do not end with Vega and Ryzen.

You can join the discussion on AMD's future products on the OC3D Forums.

NeverBackDown
Take that Volta and your 12nm Design!
Jokes aside, if they plan on 7nm I don't expect anything new until late Q2 at the earliest and probably a mid Q3 launch as likely. Considering 7nm from GloFo isn't supposed to hit volume production until Q1 sometime. Unless they go Samsung who I think is supposed to start this year? Don't remember what it was.Quote

HJ1mech
So will updated Ryzen chips on 14nm be out late this year early next or will it jump straight to the 7nm process? Sorry if it's a dumb question I've been out of PCs for awhile and I'm just collecting parts for my first build.Quote

NeverBackDown
Quote:
ALL the Ryzen CPUs/APUs launching this year are on the same 14nm process.

Next year with Zen 2 CPUs/APUs, they will be on a 7nm process. Don't be sorry for asking a question, sometimes it's confusing

AngryGoldfish
A process shrink should help tremendously with Zen. Vega 20 was rumoured to be on the 7nm process as well next year. It could be a Vega 10 GPU shrunk down with a massive boost in clock speeds. Maybe we'll see the first 2Ghz AMD GPU.Quote
Reply