At China's ChinaJoy Game show AMD announced that they will be releasing two new CPU, NOT APUs! This comes not long after AMD's announcement of 3 new Kaveri APUs a few days ago. 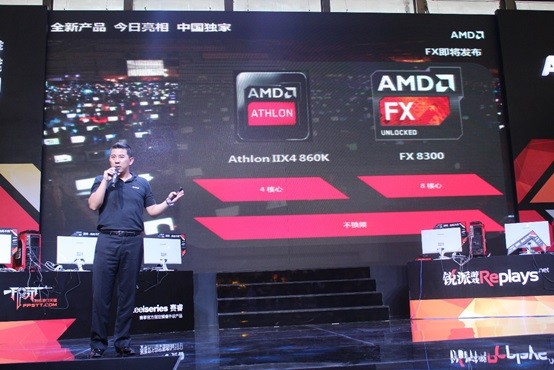 The FX-8300 will be aimed  as a "low power" 8-Core processor which does not have a unlocked mulitplier. The general specs are as follows; 8 CPU cores, 32nm process, core frequency of 3.3GHz, boost frequency of 4.2GHz and a TDP of 95W. The CPU will be using AMD's Piledriver cores, so do not expect this CPU to run any better clock for cloack than any of AMDs other Piledriver CPUs.

The second, and by for the most interesting CPU, AMD have announced is the Athlon II x4 860K. Essentially it is a Kaveri Quad core without the GPU portion enabled, meaning that this Quad core contains 4 Steamroller Cores, which with an unlocked multiplier could make a great budget gaming CPU like the previous FM2 Athlon quad cores. TDP is also expected to be around 95W and be clocked at around 3.7GHz.

Release date and pricing of these APUs are unknown at present, but if the Athlon is as reasonably priced as previous generations expect great bang per £££.

Join the discussion of AMD's New CPUs on the OC3D Forums

barnsley
Sorry but the 8300 has been around since the 8350 :P, just only really available for OEMs.
Nice to seek the 750k has a successor, I'm guessing they're gunning for the Pentium K.Quote

Tripp
Woooo my find gets put on the siteQuote

MadShadow
And someone literally said yesterday that the AM3 socket is dead :PQuote

WYP
Quote:
Its a similar story to the 5GHz monster. AMD released it first to system builders and later to enthusiasts. The FX-8300 isn't really anything special TBH.

The Athlon-K though has me interested. If the price was right I'd be tempted to buy one to tinker with.


Quote:
It was a good find mate! Found a better source article though, I don't trust wccftech. I remember their 25nm 12-core phenom, and even more recently 12-CPU core APU nonsense.Quote
Reply