AMD's gamble on 7nm has paid off.

AMD has just released its Q3 2019 financials, and they are impressive, with the company achieving its highest levels of quarterly revenue since 2005 while aiming for a greater Q4. AMD's Q3 2019 revenues totalled in at $1.8 billion.

AMD's growth comes thanks to AMD's 7nm product offerings, with strong sales of Ryzen, EPYC and Radeon products leading to AMD's strong financials. When compared to Q3 2018, AMD's Gross Margin has increased by 3%, mostly thanks to AMD's success in the high-end PC and server markets. Given this success, AMD can no longer be considered a low-end hardware manufacturer. AMD's Bulldozer days are indeed behind them.

This quarter, AMD's Computing and Graphics Segment achieved revenues of $1.28 billion, which is up 36% when compared to last year. This growth is due to the sale of AMD's Ryzen processors, and the increase in the average sales price (ASP) of AMD's products. GPU ASPs have also grown year-over-year.

In Q4 2019, AMD expects revenues to grow to $2.1 billion (plus or minus $50 million), representing an increase of 48% year-over-year and 17% sequentially. Q4 2019 will be the first quarter where both Ryzen 3rd Generation, Radeon Navi and EPYC 2nd Generation products will be available for the whole quarter, which should partially explain this positive outlook. Add that to the release of new products like the Radeon RX 5500 and Ryzen 3rd Generation Threadripper, and we can see why AMD is full of confidence.

Next quarter, AMD expects its gross margins to increase to 44%, which will help to boost AMD's profitability further. These increased margins will be driven by the success of high-end AMD products, all of which will be sold with high margins. 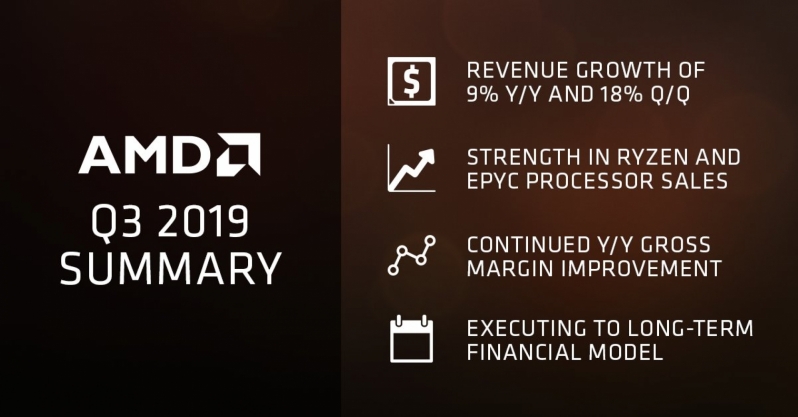 AMD has had a strong Q3 and moving into 2020, AMD is ready to continue its rapid growth. The arrival of new AMD-powered consoles from Microsoft and Sony will be sure to boost AMD's revenues in H2 2020, while the prospect of new consoles will usher in a wave of gaming PC upgrades. Add this to the success of EPYC, and AMD's 2020 is due to be transformative for the company.

You can join the discussion on AMD achieving its highest quarterly revenue since 2005 on the OC3D Forums.