2019 is expected to be a big year for AMD, with the company's use of 7nm lithography in conjunction with their Zen 2 architecture being expected to extend their market share significantly, especially within the high margin server market.

Thanks to early reports from hwupgrade.it, via @KOMACHI_ENSAKA on Twitter, we now know the specifications of AMD's first Ryzen 3000 series processors, products which will make up AMD's new Ryzen mobile lineup.

Sadly, AMD's Ryzen 3000 series mobile chips are neither 7nm or based on the company's Zen 2 architecture. Even so, the series offers a lot of refinements over its predecessors, moving to AMD's refined Zen+ core design and into GlobalFoundries' 12nm process node, allowing AMD to achieve improved power efficiency and deliver increased performance.

New to AMD's mobile APU lineup is their Ryzen 3X50H processors, which ship with higher TDPs and performance levels which are designed to low-cost gaming notebooks, delivering enough performance for portable gaming, with AMD's Ryzen 7 3750H offering up to 10 Vega compute units and clock speeds of 1.4GHz, high clock speeds for a mobile component. 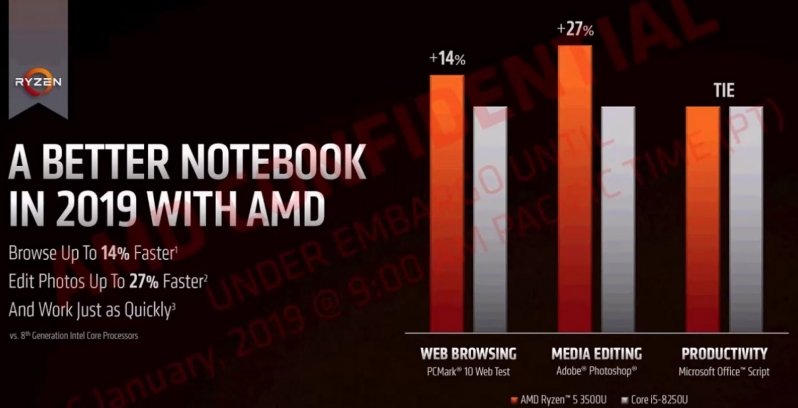 With their Ryzen 3000U series, AMD hopes to offer their users more performance than their Intel counterparts while sticking to a 15W TDP, with their Ryzen 5 3500U delivering similar or boosted performance when compared to Intel's i5-8250U.

On the gaming side, AMD's Ryzen 3000H mobile processors are designed to offer better performance than Intel's integrated graphics solutions, enabling Fortnite to be played on the go with respectable performance levels, albeit at 720p. 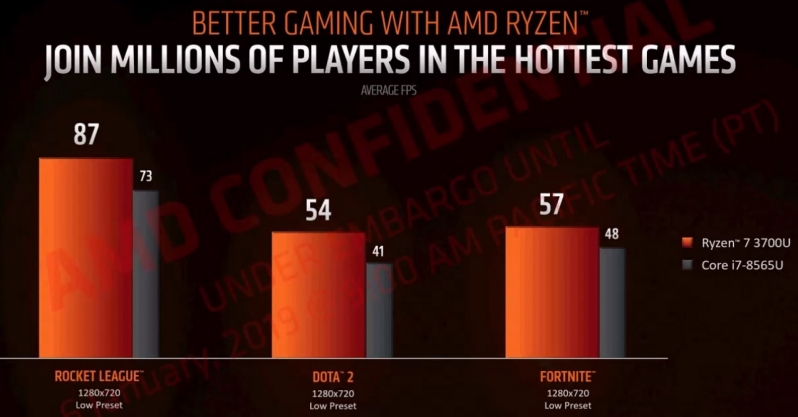 With this announcement, AMD has also revealed plans to support all Ryzen mobile processors with their Radeon Software 2019 Edition releases moving forward, which will allow AMD's notebook drivers to remain up to date with AMD's latest gaming features and driver optimisations. 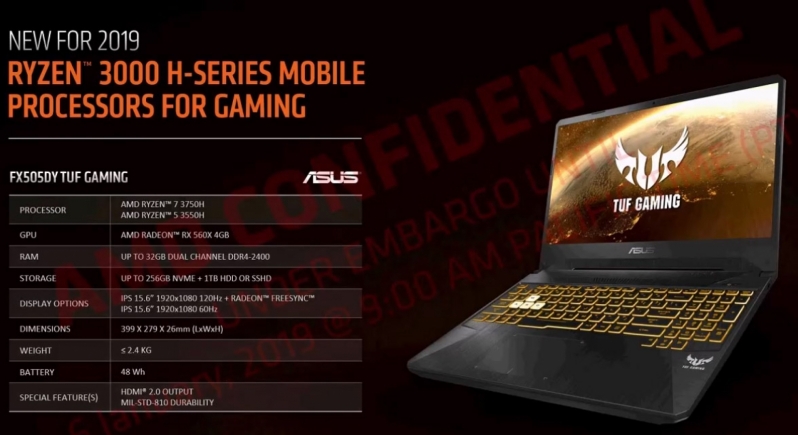 You can join the discussion on AMD's Ryzen 3000 series mobile processors on the OC3D Forums.

looz
Boost in photoshop hints of improvements in single core perf and memory latency, nice! Though it depends a lot on filters used etc.Quote

WYP
Quote:
Remember that this is Zen + Note Zen 2, so it should offer similar perf benefits as AMD's Ryzen 2000 series CPUs over their 1000 series counterparts.

It makes me wonder, if AMD is willing to let this info out today, what are they keeping in reserve for their keynote?Quote

NeverBackDown
Honestly they just need to bring the price down. Every Ryzen powered notebook I've seen since they launched has always been more expensive than a Intel/Nvidia alternative. Less power, less storage, etcQuote

AlienALX
Quote:
Yup, not what I was expecting at all tbh.Quote
Reply