K18 Engineering samples are in the wild!

Earlier today, AIDA64 received a beta update that amongst other things added "improved support" for AMD K18 ES CPUs, confirming that engineering samples for a future AMD CPU are already in the wild.

For those who are unaware, early AMD Ryzen engineering samples were listed as K17 ES (Engineering Sample) CPUs, adding to current rumours that a successor to AMD's popular Ryzen series of CPUs is on the way. At this time it is unknown exactly what this new CPU is, though it is likely to be an early Pinnacle Ridge CPU, which is set to release later this year as AMD's Ryzen 2nd Generation of products.

Right now Pinnacle Ridge is known to be made using GlobalFoundries' 12nm manufacturing process, a new node that improves upon the 14nm technology that was used to build AMD's Ryzen/Zen products. This new series of processors are expected to clock at higher frequencies and more reliably utilise high-speed DDR4 memory on desktop platforms, though AMD has not officially discussed the design/architectural improvements contained in these new products. 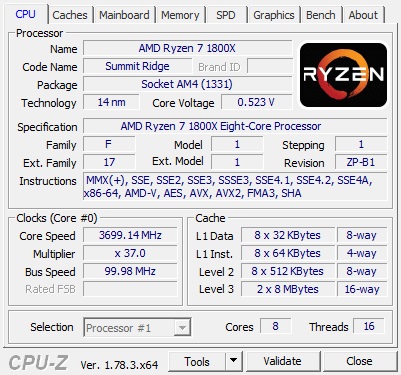 What this update shows, is that Engineering samples for an upcoming AMD processor are in the wild and that somebody is using AIDA 64 to test it, otherwise, there would be no need to update the program. The patch notes for this update are available to real here.

You can join the discussion on AIDA64's support for AMD's "K18" CPU Engineering Samples on the OC3D Forums.

Sadly the X37 MP doesn't give anything away lol.Quote
Reply