You heard that right, ASUS has created a motherboard that can utilise up to 20 graphics cards, allowing an insane amount of GPU number crunching to take place on a single motherboard.

For starter, this motherboard has 20 USB ports, all of which represent PCIe lanes. This feature allows mining-grade PCIe extensions to be fitted directly to the motherboard, rather than through a PCIe 1x to USB  3.0 adapter. ASUS' new H370 Mining Master motherboard simplifies mining configurations be removing PCIe to USB adapters, removing one potential area for failure and simplifies system troubleshooting.

Alongside this change, ASUS' H370 Mining Master offers support for three separate power supplies, allowing each unit to turn on and off in unison, eliminating the need for PSU jump starting. 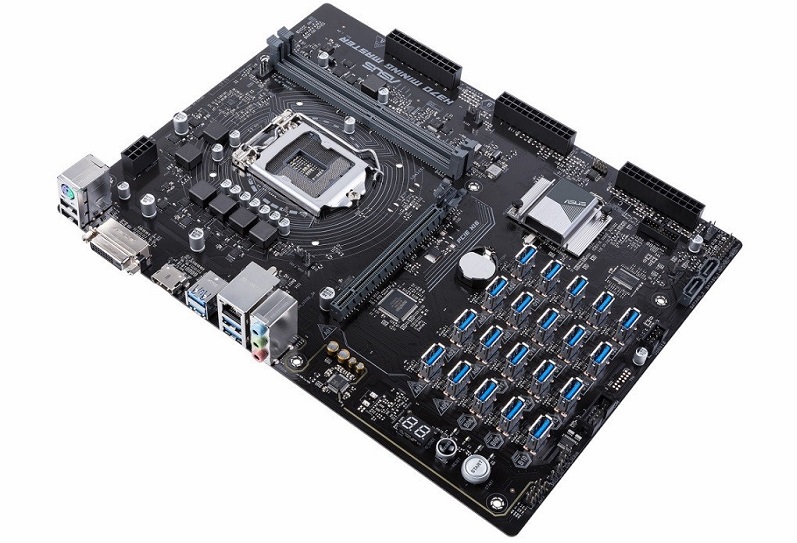 Outside of mining, this motherboard offers only the bare essentials, using a 4+2-phase VRM to support Intel's latest Coffee Lake LGA 1151 processors and a standard Intel Gb LAN port.

Most mining systems use a cheap Intel Pentium-class processor, keeping power consumption at a minimum to focus on GPU-focused Cryptocurrency mining.

Storage-wise this motherboard supports two SATA devices and memory-wise the unit supports two DDR4 DIMM slots, though most miners are likely to use a single DIMM of DDR4 memory and a low-capacity SSD for storage.

To maximise mining efficiency, ASUS has made several UEFI tweaks to their H370 Mining Master motherboard, optimizing the board's mining potential pout of the box. 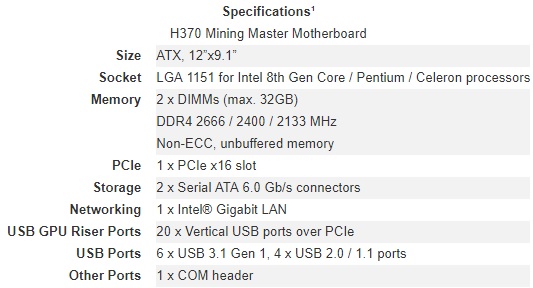 ASUS currently plans to release their H370 Mining Master motherboard sometime in Q3, though expect to see the motherboard at Computex 2018.

You can join the discussion on ASUS' 20 GPU H370 Mining Master motherboard on the OC3D Forums.

Piskeante
to invest in mining nowadays you have to be very mad. Literally VERY MAD.Quote

g0ggles1994
Quote:
You me both mate. Or I wish that there was a way of locking a gaming GPU so that it flat out refuses to run on mining software.Quote

hmmblah
That'd be so fun to tinker with. Almost wish I was a miner.Quote
Reply