This overclock is insane!

AMD's Ryzen 3rd Generation processors are coming, offering up to twelve cores at launch and up to 16 cores from September onwards, delivering compelling performance levels over a wide range of price points.

In September, AMD plans to release their 16-core Ryzen 9 3950X processor, but we already know that these chips are already available to overclockers and motherboard manufacturers. Now, an incredible benchmark result has been released onto the web, showcasing a 5.2GHz overclock on AMD's upcoming Ryzen 9 3950X.

While it is likely that this overclock was achieved using liquid nitrogen or some other sub-ambient cooling solution, this is nonetheless a fantastic achievement for AMD. On top of this, the memory listing of 2133MHz suggests that the system was using 4266MHz DDR4 memory with this overclock, which was achieved on an MSI MEG X570 GODLIKE motherboard. 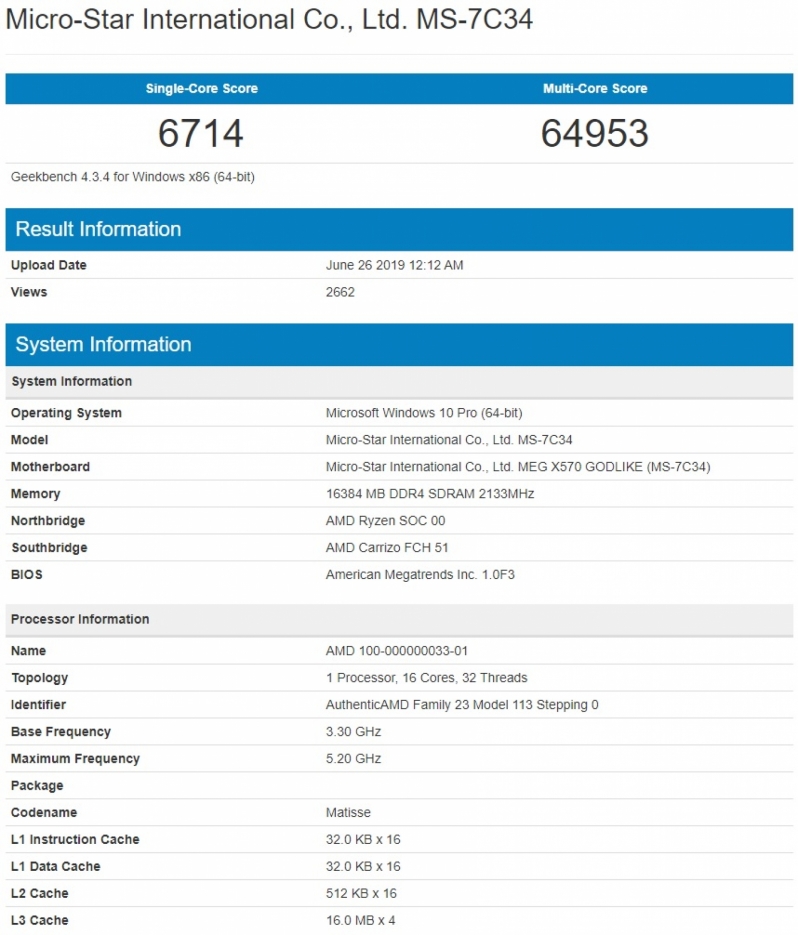 The big question this raises is how well will Ryzen 3rd Gen overclock when using air or liquid cooling. 5.2GHz may be an amazing feat, but if it is impossible to maintain similar speeds outside of sub-ambient cooling scenarios, these speeds aren't exactly useful to consumers.

I guess we will have to wait for reviews to go live on or before 7/7 to fine out how well the average Ryzen 3rd Generation processor overclocks.

You can join the discussion on the 5.2GHz Ryzen 9 3950X Geekbench results hitting the web on the OC3D Forums.

Regardless, AMD is set to be incredibly competitive this generation.Quote

tgrech
Is this a 3950X? Its base clocks are listed as 200Mhz lower, surely this is an engineering sample? Personally I'd think this is achievable with a custom water loop and lots of luck now we know it's not an architectural limit though, it's only 500Mhz above boost clock, usually you bring out the LN2 when going 1-2Ghz over boost.Quote
Reply