Intel's next-generation of desktop core series processors are due to deliver PC builders more cores and threads than before alongside boosts in core clock speeds, delivering a notable performance boost over today's Coffee Lake series components.

Now, Intel's i9-10900K has appeared online through the UL Benchmarks benchmarking database, as uncovered by _rogame on Twitter. This revealed a processor with a 3.7GHz base clock speed and a reported boost clock of 5.1GHz, which lines up with existing rumours for Intel's Comet Lake CPU lineup.

Previous rumours gave Intel's i9-10900K boost clocks as high as 5.3GHz; thanks to features such as Turbo Boost 3.0 and a new Intel feature called "Velocity Boost", a setting which is likely to be an Intel alternative to AMD's XFR technology for Ryzen series processors. These changes should give Intel a notable boost to single-threaded performance with their upcoming processors.

Now, Intel's 10th Generation of desktop CPUs is rumoured to offer 10-core models, boosting Intel's core counts by 2.5x on its mainstream desktop socket when compared to Intel's early 2017 offerings. Stranger still, is that Intel's pre-Zen i7 specs are also rumoured to become the baseline of Intel's Core i3 series. That's right, in three years, Intel Kaby Lake i7 has been relegated to i3 status. 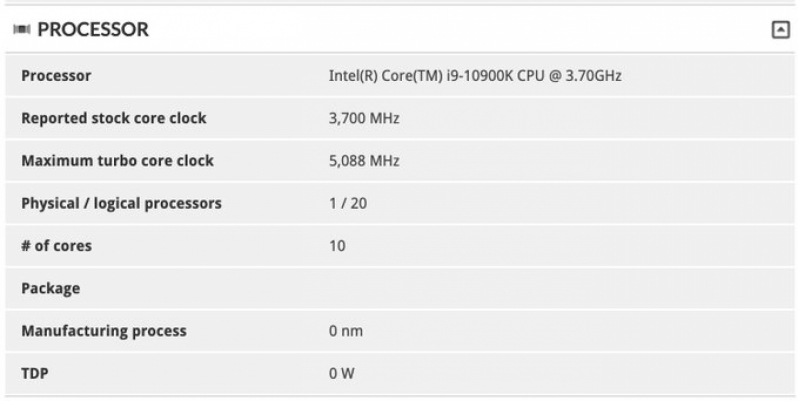 With Comet Lake, Intel will be competing with 16-core AMD processors like the Ryzen 9 3950X with a 10-core processor, a factor which will likely force Intel to offer consumers competitive pricing. On the other hand, Intel could push its single-threaded performance advantages to justify higher pricing, or heavily market its gaming performance.

tgrech
Well, if the rated TDP is really up 30W then given how Intel use those figures, and the power draw of the 9900K, the power consumption/thermal output under full boost is probably going to be like 200W. Far from impossible to cool but you'll want something beefy, this is FX-9590 territory.Quote

AlienALX
Watched a video online about the 9900k in the Area 51m.

Holy balls they get hot. 100c in a matter of seconds.Quote
Reply