If we have learned anything about AMD's Ryzen 3rd Generation processors, it's that while they delivered excellent performance at launch, they also shipped with a lot of room for further tinkering and optimisation.

Last month we retested 11 motherboards to showcase how AMD's AGESA 1.0.0.3 ABBA BIOS updates impacted Zen 2's performance and discussed how AMD's new AGESA 1.0.0.4 updates impact the boost times of AMD's AM4-based systems. AMD's Ryzen 3rd Generation processors still have room for optimisation, and thanks to community members like 1usmus, we can see that dramatic changes are still possible for Zen 2.

1usmus, the author of the DRAM Calculator for Ryzen, has created what he calls the 1usmus Ryzen Power Plan. This new power plan focuses on achieving the maximum performance levels out of AMD's Zen 2 processors, specifically those that use two or more CPU core dies, such as the Ryzen 9 3900X and Ryzen 9 3950X.

When installed, this power plan can be selected within Window's 10's Power Plan options, assuming that the following settings are selected in your PC's BIOS. 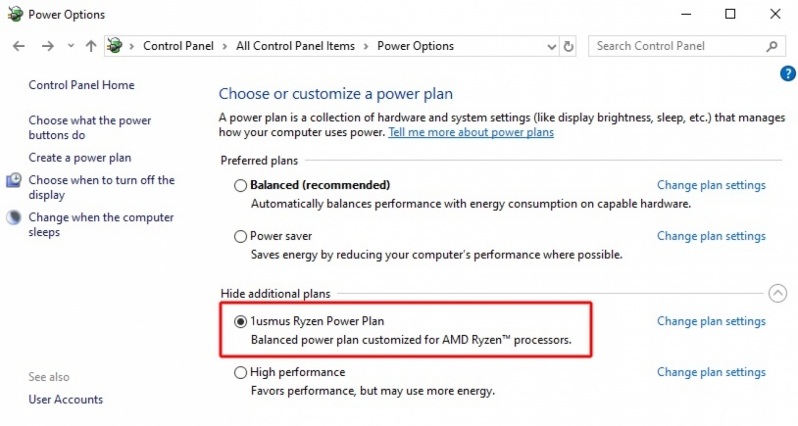 When it comes to core frequency, 1usmus notes that the average highest core frequency on his Ryzen 9 3900X increased from 4.38GHz to 4.58GHz, a boost of 200MHz. Not bad for a small software side-mod.

Sadly, we are unable to test this new power plan at the time of writing, but it clearly shows that AMD still has some Zen 2 performance that's waiting for AMD to exploit. Perhaps AMD can access this performance through a future Windows 10 update or their own custom power plans. Either way, it looks like users of AMD's Zen 2 processors have a new avenue to increase their CPU performance.

According to 1usmus, his power plan is designed to work on all Zen 2 processors, including AMD's planned Ryzen 3rd Generation Threadripper products. Hopefully, we will see AMD release a new power plan that can implement similar changes in the near future, or otherwise access this extra performance through software.

You can join the discussion on 1usmus' custom power plan for AMD's Ryzen 3rd Generation processors on the OC3D Forums.

looz
This looks very convincing, I'd love to see some gaming benches with .1% and 1% lows included - 3000 series might finally be on par there. Though I'm only guessing, but seems intuitive that switching across cores might cause some of the worse frame times AMD has experienced.Quote

Giggyolly
an extra 200MHz on my 3600x would be pretty damn sweet. Lets see how this plays out lolQuote

m2geek
Quote:
Literally in the same boat. Gonna have to give it a whirl tbh.Quote

NeverBackDown
Quote:
It's not switching cores. It's just telling windows to go to the best cores the CPU has for the better performance. It's supposed to reduce core hopping as stated

looz
Quote:
Core hopping ie. switching the core thread is being executed on.