Today, Thermaltake has a unique product to reveal to the world, a Closed-Loop Liquid Cooler (CLC) which offers cooling for both your CPU and system memory, something which should keep both sets of components cool under load.

Meet Thermaltake's Floe RC series of All-in-One Liquid Coolers, which will ship with 240mm (RC240) and 360mm (RC360) variants, both of which are designed to cool Thermaltake's ToughRAM RC memory modules, which are sold separately from these liquid coolers.

Thermaltake has listed this liquid cooling kit as supporting "the latest Intel and AMD" CPU sockets, including Intel's recently released LGA 1200 socket. Thermaltake has also noted that its ToughRAM series of memory kits will release with 3200MHz, 3600MHz, 4000MHz and 4400MHz kits, each of which ships with 2x8GB DIMMs. This allows users to install up to 32GB of DRAM on mainstream motherboards with 4 DIMM slots.

Note that we expect this kit to support AMD's mainstream CPU sockets, and likely doesn't include support for AMD's Threadripper TRX40 socket. Beyond that, Intel's X299 socket may not be supported, as this socket places DRAM modules on both sides of the user's processor. This liquid cooling kit only has one DRAM chilling plate.

With DDR4 DRAM, memory doesn't typically require active cooling solutions, as the DDR4 memory standard doesn't consume much power when compared to older DDR standards. That being said, memory overclockers could benefit from the increase in cooling performance, and other users could find Thermaltake's RGB memory cooling place visually pleasing. 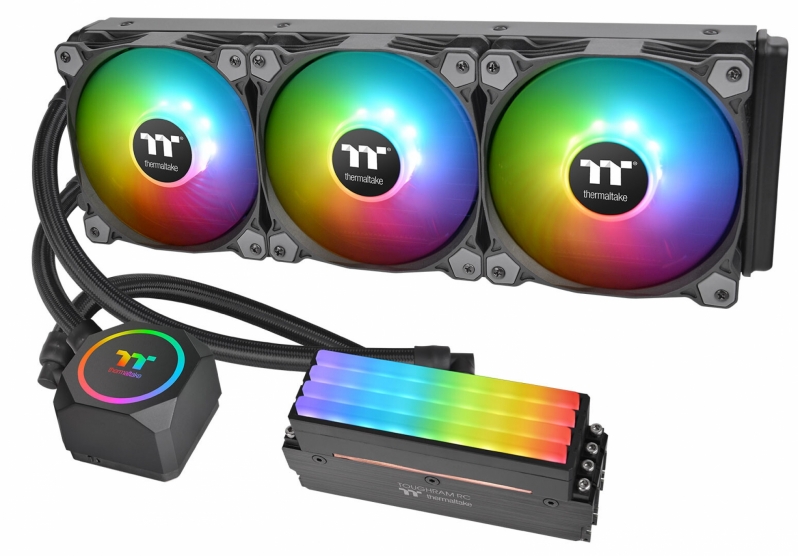 You can join the discussion on Thermaltake's Floe RC series of CPU and memory AIO liquid coolers on the OC3D Forums.

Dark NighT
Can't see the many of these being sold, most memory that runs on rated xmp just do fine with some case airflow. the people that overclock ram wouldn't bother with this kind of thing i think.Quote

demonking
Hmm, can't see many selling either. Those that OC their ram to the point where additional cooling is needed will most likely be working with an open loop or exotic cooling anyway and this will just add more heat (even though very little) to the loop.
Also wonder who TT stole this idea from.....Quote

Kleptobot
you are forgetting the 'ooh pretty flashing lights' factor. This is targeted at the crowd that get a hard on for all the RGB over the top stuffQuote
Reply