If you are building a small form factor liquid cooled PC, this water block might be a must buy

It is hard to build a compact liquid cooled PC. By their very nature, small form factor (SSF) PCs give hardware enthusiasts very little room to work with, and that can make liquid cooling your setup a challenging process. Thankfully, EK has just made that process a little simpler with their new Quantum Velocity² DDC 4.2 PWM D-RGB CPU water block.

So what is EK's Quantum Velocity² DDC 4.2 PWM D-RGB? Simply put, it is a 4-in-1 product that brings together a CPU water block, a DDC 4.2 pump, a reservoir, and a DDC pump heatsink. This product is an ideal component for a high performance mini-ITX PC, as it allows users to fit all of these components on top of your processor, eliminating the need for additional space for a separate, dedicated, pump and reservoir.

While the Quantum Velocity² DDC 4.2 PWM D-RGB CPU water block is rather large, it occupies a space that is often left empty within most liquid cooled PCs. Small form factor cases are often designed to accommodate air-cooled heatsinks that are larger than this water block, making this combo product an ideal space-saving product for PC builders who want to create the ultimate liquid cooled small form factor PC.

The only downside of this new product from EK is that their current Quantum Velocity² DDC 4.2 PWM D-RGB CPU water block design is only compatible with Intel's LGA 1700 CPU socket, which limits the compatibility of their design. That said, this block supports Intel's current-generation Alder Lake processors and their next-generation Raptor Lake processors. In time, it is likely that EK will create an AMD/AM5 version of this water block/pump/reservoir combo.

Below is what EK has to say about their new Quantum Velocity² DDC 4.2 PWM D-RGB LGA 1700 CPU water block. 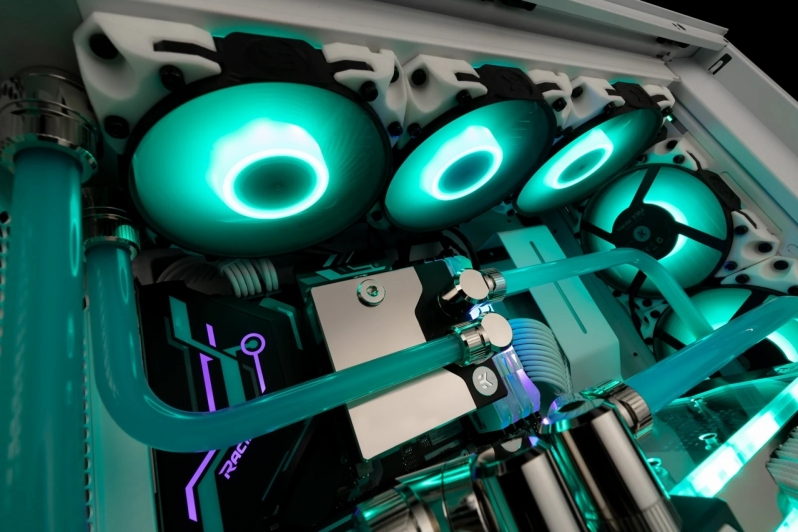 EK, the premium liquid cooling gear manufacturer, is releasing a unique pump-reservoir-water block combo for Intel 12th Gen Core CPUs and LGA 1700 socket-based motherboards. It features the latest socket-specific EK-Quantum Velocity² cooling engine, while the CPU water block has an integrated DDC 4.2 PWM pump that is cooled by the metal part of the water block acting as a heatsink. The combo is the perfect companion for ITX (SFF) builds where space for a dedicated pump and reservoir is an issue. This product effectively combined four different products into a single small enclosure for ultimate space-saving.

The product combines a Velocity² CPU water block, a genuine DDC 4.2 PWM pump with a reservoir, and a DDC heatsink.

All this is contained in an assembly significantly smaller than the sum of its parts. A total of four products in a footprint of a hefty CPU water block that fits perfectly. 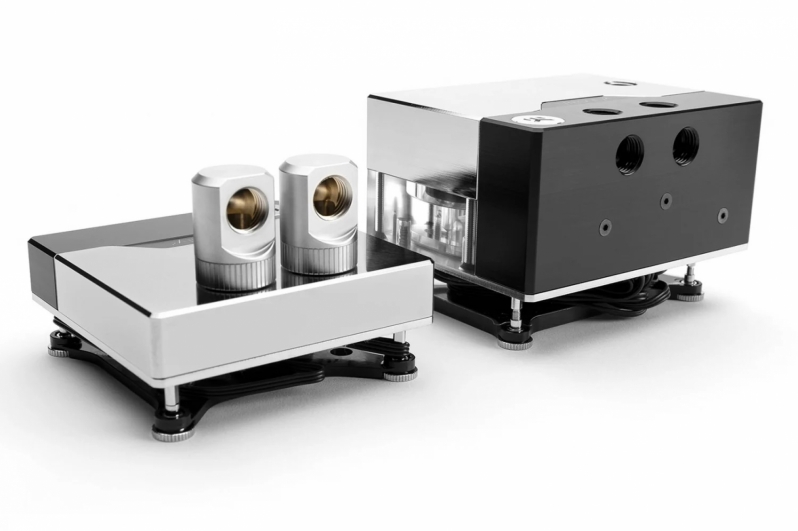 EK-Quantum Velocity² series CPU water blocks embed the next-generation cooling engine. They use a specific combination of mounting pressure and coldplate geometry tailored for the IHS and die layout of Intel LGA 1700 socket processors. Low hydraulic flow restriction enables these products to be used in setups with weaker water pumps or lower pump speeds for added silent operation while still being able to easily achieve top performance. The lathe-turned coldplate is made with precision to cover the IHS effectively and put pressure on the die area.

With this water block, you will not require a dedicated reservoir, as it incorporates a small reservoir to ease the filling process and ensure the water-lubricated DDC pump always has sufficient coolant not to run dry. It has two G1/4″ fill ports to account for both vertical and horizontal motherboard mounting and two sets of inlets and outlets.

The coldplate is manufactured out of the highest-grade, 99.99%-pure electrolytic copper, machined with precision for the best possible contact and heat transfer, and is further nickel-plated. The middle section is made of glass-like cast acrylic that is CNC-machined. On top of it stands the DDC pump with the block top made of CNC-machined nickel-plated brass.

Since DDC pumps benefit from additional cooling to ensure longer life and fewer issues, the nickel-plated brass top is used as a heatsink for the pump housing, with the heat being transferred away from the pump via thermal pads.

The brass top features two fill ports, while the two sets of G1/4″ inlets and outlets are located on the side of the block made of durable black acetal. 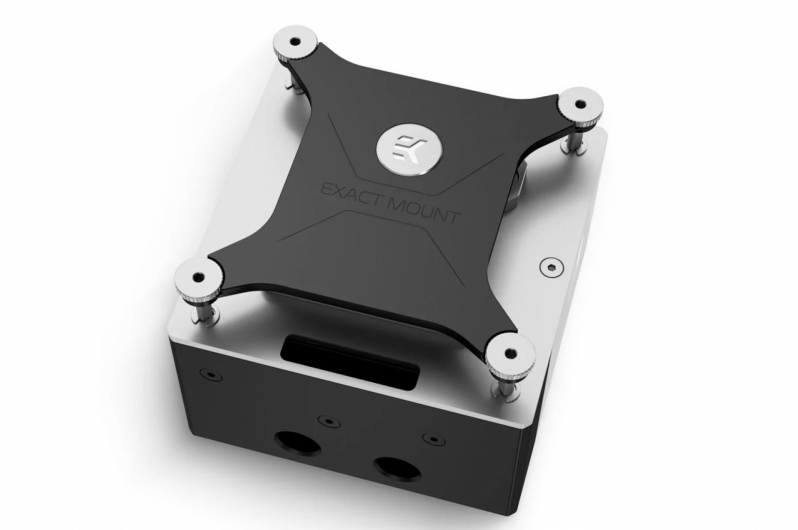 This product is compatible with all popular addressable-RGB sync technologies from all major motherboard manufacturers. The arrow marking on the 3-pin D-RGB LED connector is to be aligned with the +5V marking on the D-RGB header. The block’s middle section is made of glass-like acrylic and lit with 14 addressable LEDs.

The EK-Quantum Velocity² DDC 4.2 PWM D-RGB – 1700 Nickel + Plexi combo water blocks are made in Slovenia, Europe, and are available for pre-order through the EK Webshop and Partner Reseller Network. The Nickel + Plexi model is expected to start shipping in late October 2022. The table below shows the manufacturer suggested retail price (MSRP) with VAT included.

You can join the discussion on EK's 4-in-1 Quantum Velocity² DDC 4.2 PWM D-RGB water block on the OC3D Forums.

Warchild
im really liking the Velocity2 line. Even the blocks with the active backplates are quite pretty to look at, even if unnecessary.Quote

NeverBackDown
I wish they would allow more socket compatibility.Quote
Reply