For the longest time we have been asking (pleading) Noctua to create all-black fans, allowing the company to expand into a wider market with more neutral fan colour options. Yes, we do still like Noctua's iconic beige fans, but it is becoming increasingly difficult to build a system that works with this odd colour choice.
Noctua has now released their new Chromax series of fans, extension cables, splitters and heatsink covers, giving Noctua's products a much-needed splash of colour. This will allow the company's products to suit a wider range of PCs, allowing them to expand their influence in today's increasingly competitive fan market.

With their Chromax series, Noctua is not becoming another creator of RGB fans, which will be music to the ear of those that dislike today's fixation with RGB illumination. Chromax fans are all-black and come with NF-A15, NF-A12, NF-F12 and NF-S12A versions, each of which comes with replaceable rubber corners with red, green, blue, yellow, black and white options.  This allows Noctua to suit the colour scheme of most builds without going down the RGB route. 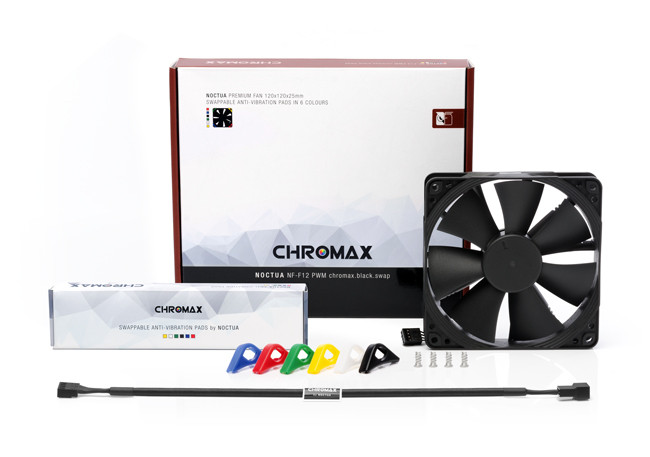 At stock, Noctua's Chromax series fans will use traditional screws for mounting, though the company also makes anti-vibration fan mounts in multiple colours if the user needs them, coming with the same colour options as the Chromax series' rubber dampeners. Additional rubber dampeners are also available to purchase, which will be useful if you damage your original set.

In addition to this, Noctua will also e offering coloured fan extension and splitter cables, allowing their users to move away from traditional all-black fan cables, though with good cable management most of these cables will remain unseen regardless. 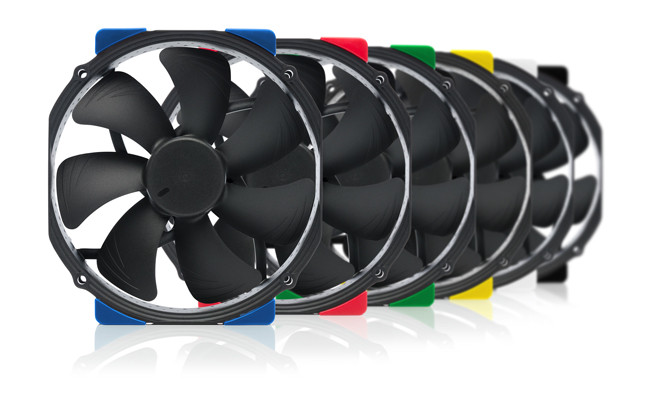 Outside of their latest fans, Noctua will also be releasing heatsink covers for their heatsinks, which includes versions for their NH-D15 series and their NH-U12S series of coolers, coming with all-black, all-white and black colour swap options.

These add-ons are designed to have no impact on thermals, but add some additional room for customisation within a user's PC.

A full list of Noctua;s new Chromax series of products can be viewed on Noctua's website. These products are shipping now and should be available at retailers soon.

You can join the discussion on Noctua's new Chromax series of Fans and accessories on the OC3D Forums.

Special thanks to Korreborg for bringing this news to our attention.

AlienALX
haha it would be funny if they did beige accessories

Linchpin
It's about time. Might actually buy some Noctua fans next time I need some.Quote

Warchild
Poor Noctua, forced into adding different colours to keep up with the insanity/cheese market we have right now

that being said, Black all the way baby

WYP
I'm just happy that Noctua has found a way to be RGB without being RGB. lol.Quote
Reply