Need a Noctua without the beige?

Noctua is finally ready to start producing all-black CPU coolers, enabling their users to move away from the brand's iconic beige and silver aesthetic, to deliver something that's a lot more stealthy.

SFF Network has reported that Noctua's all-black Chromax series of CPU coolers are "all ready for production", complete with black mounting kits, fan mounts and more. Noctua has done a lot of R&D to ensure that their all-black coolers perform identically to their standard counterparts, and now the brand is content that their all-black coolers will provide CPU temperatures that are within 1 degree of their unpainted versions.

Noctua also plans to release a series of all-black Chromax fans, which will ship with coloured corner replacements. These fans, alongside Noctua's all-black coolers, will be available "around October", though all-black versions of Noctua's high-performance NF-A12-25 will take some additional development time.

Looking at images from Computex, it seems like Noctua cannot get the black colouring of their Sterrox polymer fans right, a problem which slowed the development of the original brown and beige NF-A12x25. 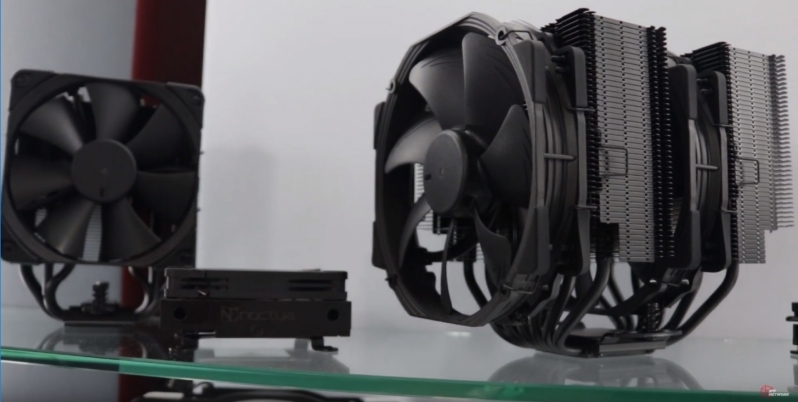 You can join the discussion on Noctua's all-black Chromax CPU Coolers being "ready for production" on the OC3D Forums.

I assume this is just the finstack that's painted? The fans, I'd hope, are just moulded in a different coloured/dyed plastic. Also isn't black the best colour for heat radiance?

It's about sodding time they went all black, they'd have made an absolute killing if they'd done this like 5+ years ago. I know they're all about their colours and brand.. and I'd still buy them regardless, but making them black wasn't exactly what I'd call a difficult thing to do, considering the amount of extra market share that would give them in the gaming/enthusiast market...Quote

NeverBackDown
Yeah SuB it's just the finstack. The Chromax fans have been around for a couple of years alreadyQuote

SuB
Quote:
See this is what happens when you go AFK and get married and stuff, you miss all the good news. lolQuote