Noctua has today released two new low-profile CPU coolers onto the market, the AM4-specific NH-L9a-AM4 (an AM4 specific version of their NH-L9a) and their NH-L12S (an updated version of their NH-L12).
These two new CPU coolers reflect AMD's new market position as a provider of competitive CPU offerings with Ryzen, especially as the introduction of AMD's Ryzen-powered APU series approaches. Both of these CPU coolers will be compatible with Ryzen CPUs with TDPs of up to 95W, though they are not recommended for overclocking or higher TDP parts.
Below is a comment from Noctua's CEO, Roland Mossig, congratulating AMD on the impact of their Ryzen CPU architecture in 2017.

AMD has made a big impact on the market with its Ryzen architecture and the platform will become even more interesting for compact HTPC builds when the first Ryzen-based APUs are introduced next year,

The NH-L9a-AM4 will be priced at €39.90 and $39.90 in the EU and US respectively. This cooler will come with an AM4 specific mounting solution and is designed to offer 100% RAM/PCIe compatibility and use an "optimised" NF-A9x14 92mm fan to operate quietly under load.
Noctua's NH-L12S is a new version of Noctua's NH-L12, coming with an AM4 compatible mounting solution as well as support for LGA 115X, LGA 20XX, AM3+ and FM2+.
This new cooler will come with an improved NF-A12x15 PWM slim fan, which offers better thermal performance than this cooler's previous iteration with its smaller 92mm fan. This cooler will cost €49.90 and $49.00 in the EU and US respectively. 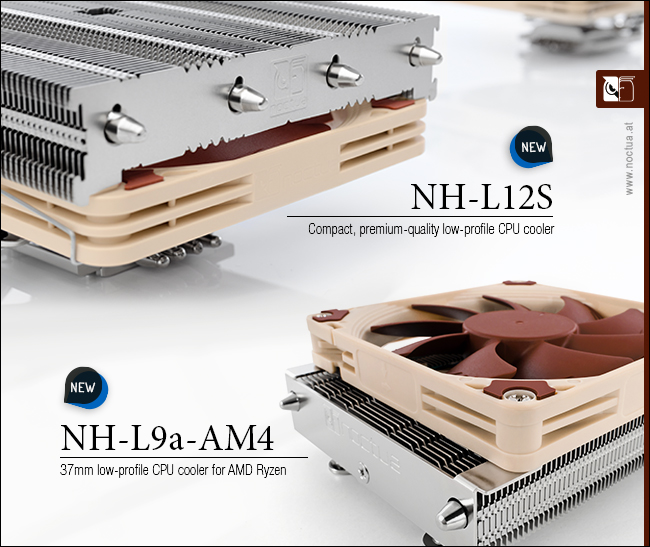 You can join the discussion on Noctua's new AM4 compatible NH-L12S and NH-L9a-AM4 on the OC3D Forums.