EK Water Blocks has released a revised version of their LGA 3647 Annihilator series water block, offering a design that is designed to better cope with the higher TDPs of Intel's latest server processors.

While EK's news post does not mention it explicitly, it is obvious that the company is referring to Intel's new Xeon W-3175X, an overclockable Socket-P processor that offers 28 Skylake-X Cores. This CPU can crank out a lot of heat when overclocked, giving EK more than enough reason to redesign their block, especially after considering the fact that Intel's LGA 3647 socket will continue to be used with Cascade Lake.

Meet the EK Annihilator PRO, a block which ships with both narrow and square mounting plate designs, which allows the water block to be used with both variants of Intel's Socket-P. The block also boasts several new mounting options, making the block compatible with more U1 server designs, featuring 9 ports to deliver unparalleled levels of customisability.

Like other EK water blocks, the Annihilator PRO is built using a machined nickel plated copper coldplate and a POM Acetal top, while the socket mounting plate is made using stainless steel. EK claims that this block is made using the "purest copper available on the market", which is perhaps what justifies this block's €139.90 pricing. 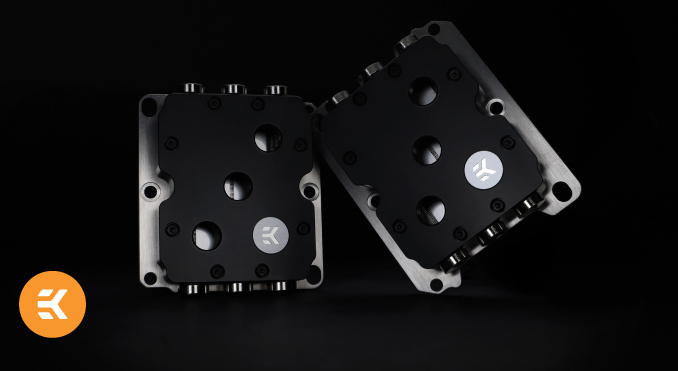 You can join the discussion on EK's Annihilator PRO water Block on the OC3D Forums.

NeverBackDown
Well mine as well go all out at that point right? what's another $300 for a watercooling setup that already cost thousandsQuote

WYP
Quote:
Yes. AIO liquid coolers and dedicated loops are used, especially in a place where having ultra compact servers is a must. There is a reason why this block has inputs and outputs on the sides.Quote

tgrech
Yeah exotic cooling techniques have also been popular in large scale enterprie setups but recently water cooling very similar to consumer setups has gained a lot of popularity and is expected to become ubiquitous for enterprise setups in the next few years now we're at a point where you can safely and reliably hot plug most components(For quick repairs with low down time). As density increases, particularly at the chip levels with MCMs, water cooling starts to become a necessity. So now MCMs are here for CPUs, enterprise grade water cooling is quickly coming with it.
Here's Hewlett Packard Enterprise' take on it (They go into the hard physical limits of air vs waters thermal density and stuff further down if you're interested in why we can't just make air cooling better):
https://www.hpe.com/us/en/insights/a...ears-1710.htmlQuote
Reply