The look of clear acrylic or acetal-covered water cooling components isn't for everyone. After all, PC building is, at its core, about customisation, the ability to create a system that is dedicated to specific workloads, designed to meet the user's aesthetic preferences and utilise the preferred components that users select.

What if I want natural wood within my PC? An odd request, but today we can confirm that EK has a series of products for you. Presenting the EK Lignum series of water block and fittings, which ship with natural wood materials, with today's offerings coming with a walnut finish.

Don't worry, EK has designed these components so that wood never comes into contact with your system's coolant, and has given their walnut materials enough room to expand and contract as room humidities change. Every water block will come with a unique grain pattern, making every Lignum product a one of a kind piece.

For starters, EK will be bringing their Lignum series to CPU/GPU water blocks and to their 12mm lineup of hard tube fittings, with their EK-CPU Lignum offering support for both AMD and Intel processors. On the GPU side, EK's RTX 2080 Ti Lignum block supports Nvidia RTX TU104 and TU102 graphics cards, but only if they use Nvidia's reference PCB design. 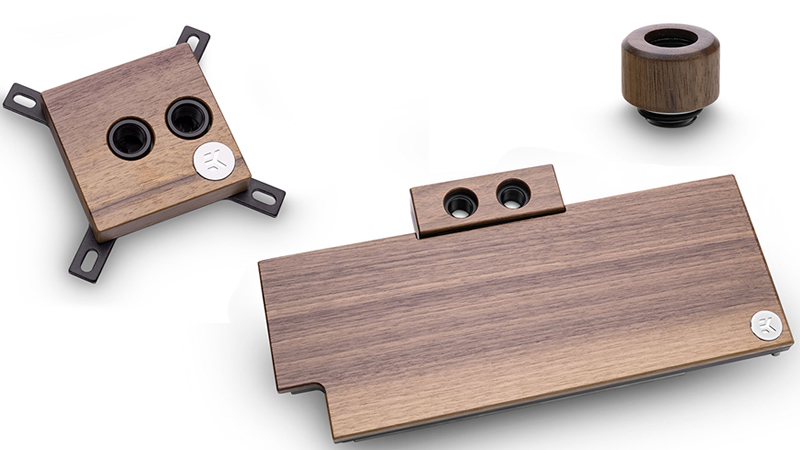 Lignum series blocks are designed to the most premium of premium systems, and EK plans to create more Lignum series components moving forward, including models with different wood finishes.

You can join the discussion on EK's Lignum series of natural wood water cooling components on the OC3D Forums.

As much as I love the look, not sure I would like a wooden backplate if it is going to trap heat.Quote

WYP
Quote:
I haven't seen any pictures of wooden backplates. You might be stuck with metal there.Quote

Warchild
Quote:
They first unveiled it last year along with all the other blocks. Perhaps they abandoned the backplate.Quote

WYP
Quote:
Fair. All I know is that EK doesn't mention it in their press materials.Quote
Reply