Cooler Master has just launched a new series of All-in-One CPU liquid coolers, the MasterLiquid Flux series, which have received upgrades that improve all aspects of their liquid cooler design to deliver stronger cooling performance and enhanced heat dissipation.

For starters, Cooler Master has fine-tuned the copper base of their FLUX series coolers to improve heat dissipation, increasing the size of their heat fins while bringing these fins physically closer to the surfaces of modern processors. When combined with Cooler Master's upgraded dual-chamber pump design and motors, Cooler Master's Flow series offers users accelerated heat transfer, which should result in lower load thermals when compared to older AIO liquid coolers from the manufacturer.

Alongside these changes to Cooler Master's pump/base design, Cooler Master has also using redesigned fans to increase air pressure and air intake while maintaining noise levels below 32 dBa at each fan's maximum speed.

Fan upgrades have allowed Cooler Master to increase the fin density of their liquid cooling radiators, allowing the company to boost the surface area that is available for heat dissipation. This allows Cooler Master to more efficiently remove heat from their AIO's coolant, resulting in lower coolant thermals and lower CPU thermals. Cooler Master's MasterLiquid Flux series will be available with 240 mm (PL240 Flux) and 360 mm (PL360 Flux) variants.

Other additions to the MasterLiquid Flux series are the cooler's upgraded Addressable RGB (ARGB) lighting on the unit's pump and base. These units will also ship with a Gen 2 RGB controller from Cooler Master, which can be used with the company's MasterPlus+ software. This software can be used to define the colour of each individual LED. 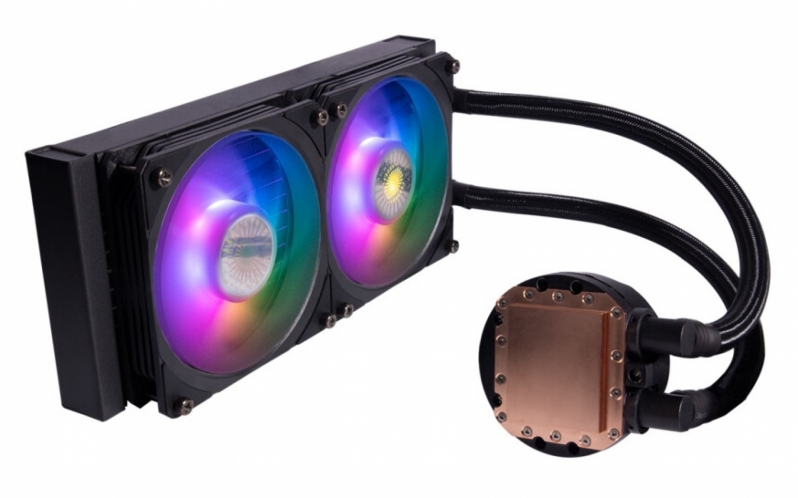 The MasterLiquid Flux Series has been refined with precision to improve on all aspects of the cooler to deliver the best performance on the market. The new Dual Chamber Pump is more compact than previous generations without sacrificing performance, delivering the perfect volume of flow to pressure for impressive cooling. The high speed motor uses a ceramic bearing impeller to force balanced water flow to and from the radiator for ultimate efficiency of heat exchange. Microchannels have been maximized with ultra-thin spaded fins to accurately target heat spots. The copper base surface area has also been enlarged and optimized with perfect base thickness for further accelerated heat transfer.

There is also ARGB incorporated in the fans and pump, with dual loop pump ARGB lighting customizable independently for visual creativity and versatility. Through both the included Addressable Gen 2 RGB controller or Cooler Master's MasterPlus+ software, each individual LED can be changed and adjusted to your liking, whether it is color, effects, or brightness. The Flux Series is the new evolution of liquid cooling, delivering the most advanced cooling capabilities in the market.

You can join the discussion on Cooler Master's MasterLiquid FLUX series of AIO Liquid Coolers on the OC3D Forums.