Ready to store your Raspberry Pi 4 in style?

Cooler Master has hit Kickstarter which what could be one of the best Raspberry Pi 4 cases on the market, offering users a strong metal enclosure which offers passive cooling, VESA compatible mounting options and full access to all of the board's connectors.

Early backers will be able to purchase Cooler Master's Raspberry Pi case for €23, offering users the Cooler Master Pi Case 40 and four VESA wall mounts. These units are due to ship in September.

With an Aluminium shell, TPU bumpers and a polycarbonate base, Cooler Master's Pi Case 40 offers users the strength they need to transport their Raspberry Pi 4 with ease and keep it cool and quiet under load. Thanks to their case Aluminium design, Cooler Master states that they have "refined the heatsink design to provide 4x times the amount of surface area compared to similarly-sized competitors." Furthermore, Cooler Master's use of a singular Aluminium block gives the heatsink a higher "heat soaking capacity" than competing solutions.

One of the most innovative aspects of this cooler is its ability to offer full access to the Raspberry Pi 4's GPIO connections, thanks to a right-angled adapter which makes these connectors accessible after moving a flap in the Pi Case 40's TPU bumper. This allows for tidy cable management options and makes the Raspberry Pi 4's connectivity options immediately usable, despite using an enclosure.

The Cooler Master Pi Case 4 also includes a reconfigurable power button, which can be used to power on/off the unit or be remapped to run scripts, overclock the system or open applications. The only limit here is your creativity and coding ability. 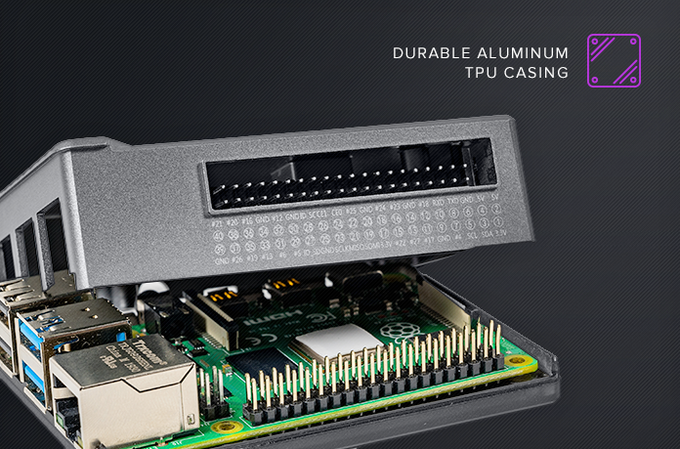 The Pi Case 40 will be an open-sourced Raspberry Pi 4 case design, allowing users to develop interesting products using Cooler Master's design. Sometime in the future, Cooler Master will release "all the schematics and the 3d model for Pi Case 40 for free, for anyone to download." 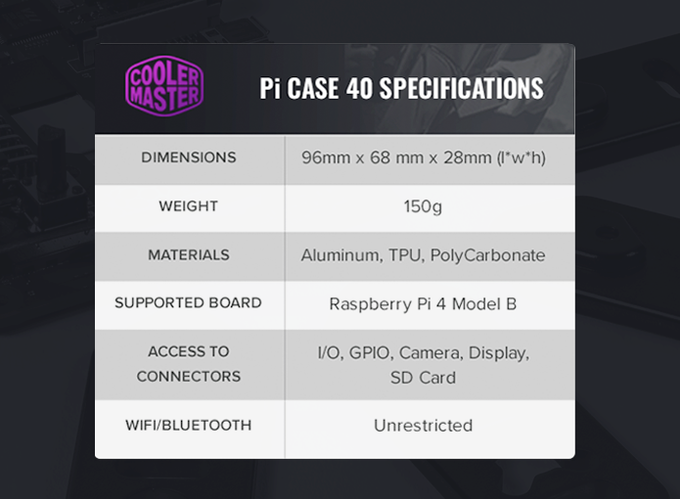 You can learn more about Cooler Master's Raspberry Pi 4 case through the company's Kickstarter page.

You can join the discussion on Cooler Master's Pi Case 40 Raspberry Pi 4 enclosure on the OC3D Forums.

NeverBackDown
Wow that's awesome of them to give their design for free. Unfortunately I don't have a 3D printer but if it's cheap I may get one if I ever get around to getting my Pi.Quote
Reply