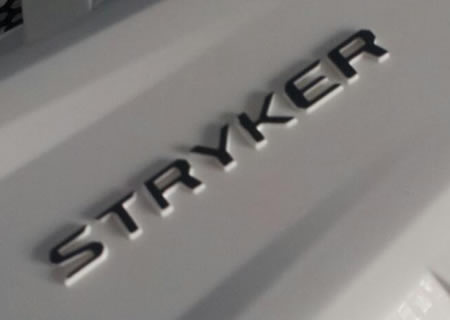 On the 23rd of November 2011 we posted a review on the original black CM Storm Trooper, it was a milestone in case history, we said at the time that this was the best case Coolermaster had ever built, we still stand by this statement. There were rumors early this year of an upcoming white Trooper that CM Storm were going to call the Stryker to keep law suits from George Lucas down to a minimum! We have had a Stryker in the OC3D office for quite a few weeks although we have not been officially allowed to talk about it we think it may have mistakenly made it into a couple of videos in the back ground.

Because of the similarities with the Original Trooper we have decided not to give it a stand alone review, but do a comparison instead. You can find the Full Trooper review here and we will post the video review below.

So the basics, have they made an amazing case better? Simple answer in our eyes is making anything white should make it better! CM Storm have gone that extra mile on a few points by adding white fans, a nicely designed window and even tweaked the mesh design to better suit the case. Price has gone up to £139.95 which is a little more than we expected but realistically the case is still amazing value compared to some other cases on the market and it would still come highly recommended mainly due to its awesome feature list and its stunning looks.

Stay tuned because we can officially announce that the CM Storm Stryker will be the basis for an OC3D Staff Build very shortly, so anyone looking for inspiration as to what can be done with one of these cases to make it unique should check back very soon.

You can place your order now for £139.99 from the boys over at Specialtech.

Thanks to CM Storm for sending us the early sample, you can discuss your thoughts in the OC3D Forums.

Josh Weston
Can't tell if I prefer this or the original Trooper variant.

I like the design of the Stryker, but I prefer black for cases...god damn it!

Good review though, as ever.Quote

MadMarc
I'm looking forward to seeing you building your rig in this case. Although I personally don't like the design of this case very much, I'm sure you will, as always, do an amazing job.Quote

Excalabur50
Awesome to hear Orca is going to be in this case It is sex on a stick or in a case you get my drift any way love the look of this case and good luck and enjoy your new build.Quote

jamesriley94
Got to the end, saw the powered by corsair - ooh, hello extra 2 minutes!