Waterblocks don't get much better looking than this!

Back in the mid 2000s, the only way to have a high end, fully watercooled PC was to use a massive case such as a Lian Li V2000, which still needed a fair amount of modding to make everything fit. Even to have a high end non-watercooled PC, you still needed a fairly big tower in order to fit all the heatsinks, full size motherboard, large graphics cards, along with a few hard drives. As you all know, technology has progressed a lot since then in terms of size and efficiency and seeing compact micro-ATX and ITX gaming PCs is now pretty common, as we no longer need to have a massive tower to get a great performing system. 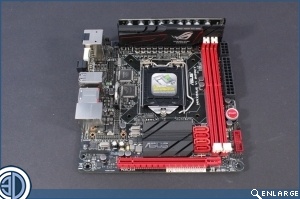 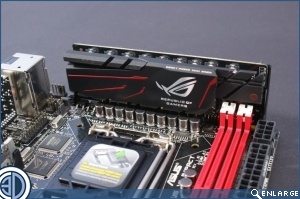 With Intel’s Z77 chipset last year, we saw the Asus P8Z77-I Deluxe being one of the first high-end, overclocking friendly motherboards we’d seen in the ITX standard. With the Z87 range, we saw the update of this, the Asus Z87i, along with the amazing performing Z87 Maximus VI Impact – the first ITX motherboard in the Republic of Gamers brand from Asus. These allow you to install anything up to an i7, with up to 16gb of RAM, and any single video card you want, including dual-GPU cards such as the Nvidia GTX 690 and the AMD 7990.

So, we know we’ve got the performance side of things sorted with these motherboards, but what of watercooling? Bitspower have now introduced a full cover waterblock to fit the Asus range of ITX boards for the original P8Z77-I Deluxe, the Z87i, and of course, the Maximus VI Impact.

TTL takes a look at the Bitspower full cover block for the Maximus VI Impact!

Here at OC3D, we think these full cover waterblocks from Bitspower are some of the most innovative new products we’ve seen this year. The blocks have been so well designed that they cover the CPU, chipset and VRMs, which is even more impressive since the power delivery PCB on these boards is perpendicular to the board itself. If they’d have just done a VRM and chipset only solution, running tubing to and from that block and to a separate CPU block would have been a nightmare. Bitspower have understood this, and so developed an all in one block, with only one input and one output, which looks great and has the capability to perform superbly if used with the right radiators and pumps. 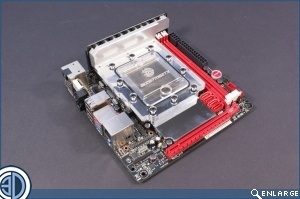 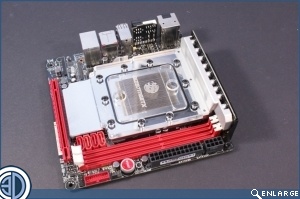 The installation of this block is a relatively simple process. Of course you’ll need remove the current heatsinks already installed on the board which may be a little daunting, but after that, it’s a relatively simple job of screwing the Bitspower block onto the board. If you already have watercooling experience, then the process isn’t too different as to what you may see with a graphics card waterblock. Even if it is a little fiddly, we’re sure you’ll be impressed with the end result.

We’ve already seen some great looking watercooled ITX rigs, and the majority of those have been made in the Bitfenix Prodigy. With the latest releases in the Bitfenix line-up, such as the Phenom, we expect to see even more great looking builds in the near future. Bitspower offer this block in four different colours/materials; the nickel plated one shown in the video with the clear top, another nickel plated one with an ‘Ice Black’ acrylic top, and then the clear and black acrylic tops on a copper block. We really love this block, and can’t wait to see what you can do with it!

Thanks to Bitspower for supplying the waterblock. If you want to voice your opinions, head over to the OC3D forums.

WillSK
I don't think words can describe how much I love this concept. Especially with chips like the Z87 where motherboards are playing less of a role in terms of overclocking potential and the fact that watercooling in small form factor PCs is no longer unheard of I think it is certainly an appealing route for the future. I know I would certainly consider a smaller PC if I can crank this kind of power out of it now.

Would love to hear what case you guys would use for a small gaming rig? Is the prodigy still the reigning champ?Quote

jamesriley94
Quote:
It depends on the use really.
If I was watercooling, the Prodigy would be my choice.

If you're wanting an incredibly compact rig, then the CM Elite 120 may be under consideration.

Personally, it would take a lot for me to go smaller than a Prodigy. I just think you give up too much in terms of upgrade-ability and cooling options to give up the Prodigy for something smaller. I've not properly seen what the new Bitfenix cases are like (built on the same chassis as the Prodigy I believe(?)). Depends if you like the exterior design more I guess.Quote

WillSK
Quote:
Yeah I definitely meant as small as you would go for water cooling. I by no means would want an ultra compact unless it was a HTPC for the reasons you say (sacrificing too much).

Can the prodigy be sufficiently water cooled without having to mod these days? or is there still a bit of dremeling required?Quote

Just a tip: Put the main CPU screws in first, it will stop you from bending the connections between the motherboard and the VRM board. Probably doesn't matter, but it is a habit kind of thing. Also it might make putting the VRM backplate on easier because you will not have to worry about the waterblock shifting.

I do like the idea of this, but the problem at the moment that I see is that most ITX cases don't have the most brilliant rad support. I actually think the idea from the heatsink comes from laptop heatsinks, which cover more than just the CPU or GPU, and have contact points for the VRM, etc. I'd like to see a watercooled laptop tbh, just for lolz.

If you can get yourself a decent case with a 240 and a 120 or preferably 2x 240s, I think you'd have yourself a really rip-roaring fast ITX build.Quote

chrismjurd
super nice looking block, nice job. now if i just had a couple of spare kidneys to sell.Quote
Reply