With Intel's X299 and AMD's TR4 (Threadripper) CPU platforms, core counts will be increasing significantly for consumer systems. This means that cooling requirements will also rise for overclockers, as more cores at high clock speeds will consume more power and produce a lot more heat than most consumers are used to.
High-end cooling requirements are rising, facilitating the need for larger AIO liquid coolers. At Computex 2017 we have seen several brands showcase custom water cooling hardware and new large radiator AIO liquid cooler designs. One of these new designs were from Be Quiet, with the Silent Loop 360, coming with a massive 360mm copper radiator.
This new cooler will come with Be Quiet's Silent Loop reverse flow pump design, which was created to offer minimal pump noise while still maintaining high levels of cooling performance. This cooler will also come with three Pure Wings 2 120mm PWM fans, which are designed to offer optimal airflow for this large radiator designs. 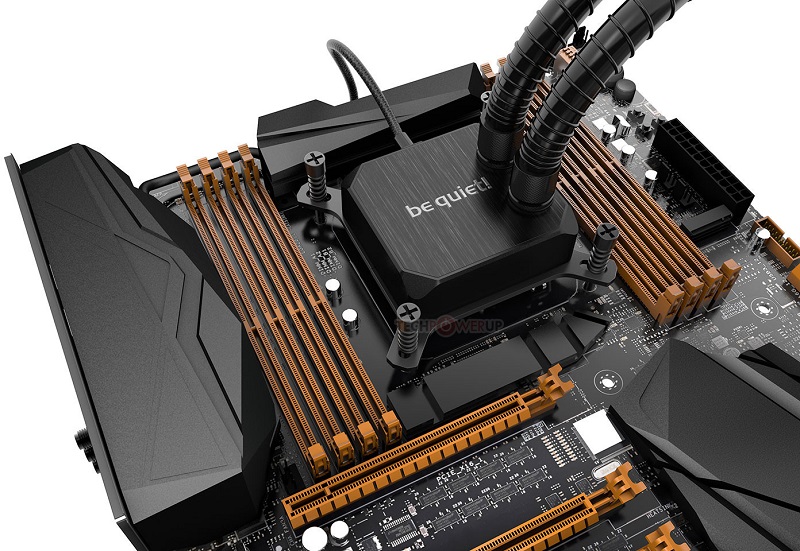 The Silent Loop 360 will offer support for all modern CPU socket designs, including AM4 and LGA 2066, though at this time TR4 (Treadripper) support has not been confirmed.

You can join the discussion on Be Quiet's Silent Loop 360 AIO liquid cooler on the OC3D Forums.

Dawelio
I like this sleek, brushed aluminium design. Although those metal things around the tubes, why does manufacturers include those on the tubes?

Bartacus
Quote:
The coil is supposed to prevent kinking of the hose. Looks ugly as hell though, and personally I've been water cooling for a few years now and never had an issue with kinked hose.Quote

Dawelio
Quote:
Yeah, I can understand your point. Although, your other point as well. Only Fractal used it on their Kelvin coolers. No other AIO company has, as far as I'm aware.

Like I don't think Corsair wouldn't use it if it didn't need to. So obviously it's not really needed, hence me wondering why they included it really?...Quote

Bartacus
Most likely to protect themselves from the 1% of idiots who will buy this and kink the hose by being stupid.

I'm really tempted to run this in the front of a Corsair 460X.Quote
Reply