A cheaper 360mm addition to the ROG cooling lineup

As much as many ASUS fans love the look of the company's ROG Ryuo and Ryujin series of liquid coolers, it is hard to deny that they both sit on the expensive side of the spectrum, with the Ryuo's lack of a 360mm option proving to be a major sticking point for those who disliked the Ryujin's design.

This expense came mostly thanks to the company's inclusion of an expensive OLED screen, adding a unique layer of customizability at the cost of increased electronic complexity and component cost. With the ROG Strix LC series of all-in-one liquid coolers, ASUS has addressed both of these complaints, lowering their manufacturing costs by removing their OLED screen while adding a 360mm option to their lower-end lineup.

While ASUS' use of an OLED panel can enable users to more easily monitor their system or display custom graphics, ASUS knows that there will be a large number of users who would prefer to display something a little more basic, perhaps an RGB illuminated ROG Logo, a factor that makes the Strix LC the ideal cooler for ROG fans on a tighter budget.

That's what the ASUS ROG Strix LC series of All-In-One (AIO) liquid coolers are all about, lowering pricing while creating a product that is simpler to use. No OLED panels to play around with, just an Asetek-made liquid cooler, ASUS ROG series fans and customisable RGB illumination.

ASUS' custom fans operate using a 4-pin PWM connection and can operate at speeds of between 800 and 2,500 RPM. At this time ASUS has not revealed the pricing of their latest closed-loop liquid coolers (CLCs), though they are set to be less expensive than their existing Ryuo and Ryujin series design. 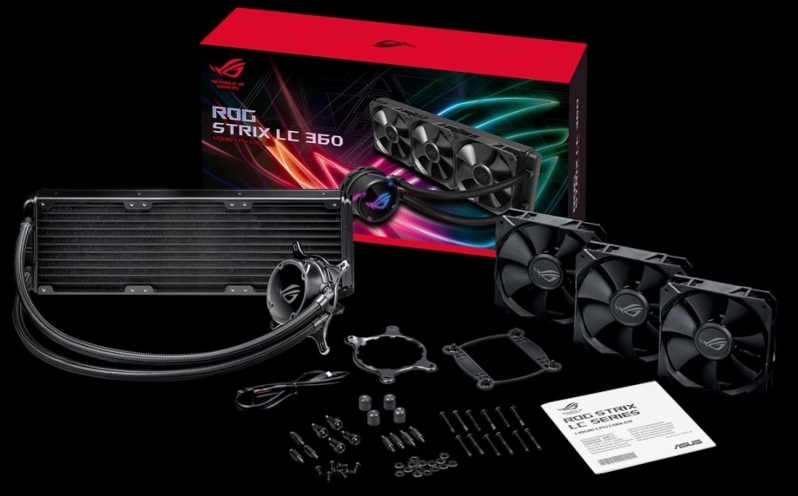 You can join the discussion on ASUS' ROG Strix LC series of closed-loop liquid coolers on the OC3D Forums.