ASUS has been expanding onto every facet of the PC market, having recently entered the world of All-in-One liquid cooling, power supplies and RGB illumination. Today, it is almost possible to create a full ASUS/ROG PC, allowing the Republic of Gamers hardened loyalists to showcase their fandom in a way that was impossible before.

The ROG Strix Helios is already available, but new to ASUS' ROG lineup is their new "White Edition" Helios variant. It's the same as ASUS' original Black Helios model in seemingly every way, aside from the case's new colour scheme. This new white version of the Strix Helios plays well with the enclosure's existing RGB features, as white can play well with every colour combination, and increase the impact of the case's pre-installed RGB lighting.

The case market is the final frontier of the PC market  for ASUS' ROG brand, and the ROG Strix Helios steps in with full support for EATX motherboards and large water cooling radiators. The Strix Helios is a robust design, supporting large motherboards, heatsinks, graphics cars and water cooling radiators. This enclosure has more than enough space to accommodate any ROG series components.

The ROG Strix Helios is designed for showpiece systems, offering users integrated RGB lighting, twin tempered glass side panels and removable carry handles which enable users of the case to easily transport their systems to LAN parties or gaming events without much hassle. All LEDs within the Strix Helios are addressable, allowing users of the Helios to adjust their case lighting setup to meet their exacting specifications. 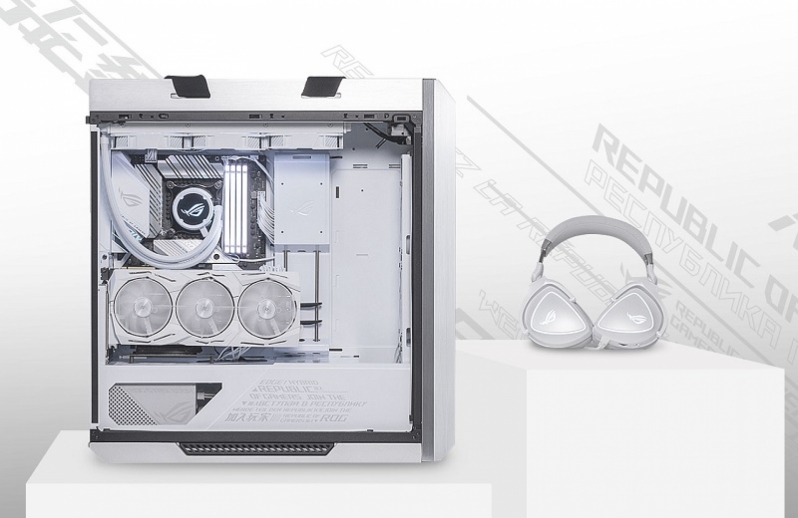 The Strix Helios is designed with ASUS' other components in mind, featuring support for a top-mounted 360mm radiator to support Ryoujin series liquid coolers and a power supply cut-out to expose the OLED screen that is included in ROG Thor power supplies. Water cooling wise the Helios supports a front-mounted 420mm radiator and up to a 360mm on the roof of the enclosure.

As we mentioned before, the Strix Helios is designed to accommodate up to EATX systems with custom water cooling loops and heavy-duty components; all while offering the ability to transport these heavy systems to events. To help achieve this goal, ASUS has integrated a graphics card brace into their case, which enabled up to two graphics cards to be supported, preventing GPU sag.

In the UK, ASUS currently sells its ROG Strix Helios chassis for £249.99. At this time it is unknown when this case's All White version will become available at UK retailers.

You can join the discussion on ASUS' ROG Strix Helios All White PC enclosure on the OC3D Forums.

AlienALX
That's really nice. Don't like the waffle all over the side of the PSU shroud though.Quote

WYP
Quote:
All of the "gamer text" on the PSU shroud.Quote

Dicehunter
I like the general look of the Helios but there is near zero airflow, Terrible design, Tech Jesus AKA Steve from Gamers Nexus tore Asus a new one for the terrible design.Quote

Avet
It is a horrible case like so many others. I really don't know who thinks that this is a good product.

Edit: I often think:" Hmmm... I could mod it to make it right." But the amount of modding that needs to be done is just not worth it. I could easily design a case in Fusion 360 have it cut and assembled in less time than to mod failed product and have a much better case.Quote
Reply